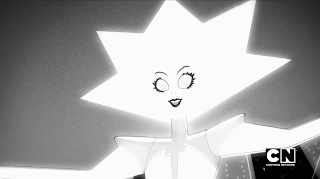 This show proves that there’s nothing scarier than a leader in all white...
So after one amazing episode, we get another pretty solid one, that ends rather abruptly if I’m honest. Picking up where we last left off, Blue and Yellow are now much friendlier to the Crystal Gems, realizing that Steven is Pink, even if they don’t understand how. Confusion further arises as the Diamonds realize their attack on earth didn’t kill all the Gems, it just corrupted a bunch of them (which the Diamonds can’t fully fix). A suggestion is made to head to Homeworld for White who likely can fix things, but Yellow and Blue showcase that even they fear White, setting up for what might be the show’s final foe. After Yellow and Blue suggest to smooth things out with White, Steven is quickly taken to her alone, where the episode ends in a pretty creepy way as White talks kindly, yet seems to be hiding a much more extreme reaction.

This episode works, largely because it is nice to see the Diamonds humanized, you can tell they don’t comprehend what’s going on, but they accept it. In a sense, it’s almost like they’re Steven’s big sisters, which is cute, much like Steven’s encounters with Rose’s ship and status. Then there’s the off-putting vibes, things like the Diamonds encountering corrupted Gems, or the landing on Homeworld, or just about everything involving White Diamond. I will say though, I do kinda feel like this should’ve been a double-length episode, especially because the episode just kind of ends, even though it feels like there’s more we should know about with everything going on. I guess it does get me hooked to see how the season finale will resolve this, but it worries me that not only will it be a bit rushed, but there’s no telling when that will even come on. Still, as always, the show succeeds in humanizing the villains, making me wonder how we’ll see White in the coming stories.

Once more, I don’t see this show lasting much longer, but getting there is still pretty interesting. While this episode would’ve worked better as a double length episode, I do like how it balances warmth and welcoming with cold and distant regarding how the Diamonds act. Hopefully this season continues to be good so we can end on a high note.