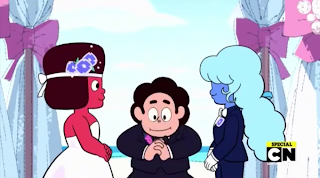 It’s a same-sex wedding, and you homophobes aren’t invited!

Real talk, this is one of, if not the best episode of Steven Universe to date, not just cause it’s making history for children’s television, but because it’s an incredibly beautiful episode with some great intense moments. I’m getting ahead of myself, as you may have expected, this is a double length episode, dealing with the wedding, a return of several characters and an epic battle. Right from the start we get one of the show’s best songs as the wedding is being prepared, Steven is the pastor, Ruby is the bride, and Sapphire is the groom; at least based on their clothing styles, which is a nice touch as typically the styles are reversed. It’s a joyous occasion filled with a bunch of the town regulars, some nice sight gags (I wish we could hear Ronaldo talking to Bismuth) and an overall beautiful moment for fans of the show. Of course all good moments must end, and this one does when the Diamonds, Yellow and Blue, invade to restart the Cluster. Lucky for our heroes, the Cluster can maintain itself now and forms a giant hand to fight Yellow’s ship, a cool sight to be sure. Our heroes aren’t safe though, as Blue leaves her ship to fight them directly, you can feel her emotions as she seeks her revenge, much like the Gems do, but as the battle seems to be in Blue’s favor, Lapis returns in one of the show’s most badass moments. Obviously Steven eventually gets through the Diamonds, but how he does so is a strange but interesting use of his powers, this episode really goes all out.

If we’re not close to the show’s ending, I’d honestly have to wonder where we can even go anymore, I know a lot of fans don’t want to hear that, but it’s true. Steven knows the truth of his mother, Rose is no longer the saint she once was, but everyone accepts she’s still important, Garnet is married, the Diamonds know the truth, it seems the only things left to tie up are Lars’ journey back home and White Diamond, which we may see tied up in the movie. If this is meant to be the end, then it’s definitely not pulling any punches as these last few episodes have had some powerful moments, this episode especially. Given a few more minutes, this could’ve easily been turned into the series finale, but that might’ve rushed things so I’m glad we’re not there yet.

As the payoff of the most recent arc, this was touching, but as an episode, this is definitely one of the best things I’ve seen out of Cartoon Network. I’m not exactly secretive about my feelings towards this show, it’s solid, but has faced numerous issues that have kept me from calling the overall product great, this one by itself though? Yeah it’s perfect.