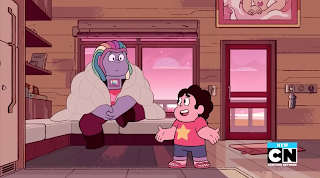 No lie I Bismuthed her.
Well the wedding is under way, but it’s lacking in guests, so Steven adds a surprise guest from the past, our favorite aggressive Gem, Bismuth. This is definitely a better episode for this season, as Bismuth being brought up to speed with the truth feels needed given the tragedy of her character, plus it helps that Bismuth is a delightful Gem. Steven’s decision is largely driven by a need to add more guests to a small party, but the choice to allow Bismuth reflect on her past mistakes, while eventually pointing out the truth of the Gem leadership was a great choice on the writers. Most of the episode has Bismuth reluctant to reunite with her former allies due to her attacks on their leader, but Steven steps up for her, it’s a simple set up, but with all the backstory over the years it feels much weightier than an average episode. Naturally Ruby and Sapphire get one more guest to their wedding, but the journey there is more satisfying than tiresome.

As far as episodes go, specifically the ones dealing with the fallout of Rose as Pink Diamond, this is probably the best episode of the bunch. Don’t get me wrong, none of these episodes have been bad, but the idea of a “traitor” coming to grips with their misguided betrayal, all while the halo of the “perfect” leader has been removed is such a good one, it’s nice to see this show tackle it. It’s just so perfect throughout it’s runtime, even when we get the obvious joke of Peridot not knowing and caring who Bismuth is, the episode doesn’t find itself straining. One consistent issue I’ve had with this show over the various seasons is that some episodes feel too short for what they set out to tell, but for me this one felt natural, which is always a sign of a solid episode.

With a wedding underway, a former traitor back on the team and of course the revelation of Rose, it’s hard to say how long this show can go. It’s been a long ride, but if we can get more episodes like this as we loom closer to what may be the show’s ending, I can honestly say it’s worth it despite various missteps the show has taken. Of course the show isn’t ending with Bismuth rejoining the team, so let’s get to that wedding episode.