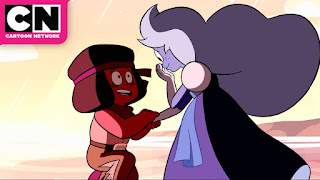 I WAS JOKING WHEN I MADE THAT LEAKS POST!
I’m not joking, back for an April Fools gag I mentioned we’d get a wedding episode between Ruby and Sapphire, which came to pass, I was not expecting that here, but okay. In any case, Steven meets up with Greg and Ruby, Greg seems shocked, but overall not very bothered by the truth of Rose’s identity, while Ruby is just okay. In fact Ruby is happy, wanting to explore her newfound freedom, rather than being tied to Sapphire because of Rose, leading to a cute cowboy version of Ruby. Amethyst follows her as her stead, while a concerned Steven tags along as a catchy song is sung, Ruby seems to love herself alone, to the point that even Steven seems accepting of Ruby being separated from Sapphire. This all turns out to be a front of course, leading to our finale with Ruby deciding to approach Sapphire, not for an answer, but for the question of the two.

As an episode this one works because it avoids dwelling on the revelation of Rose’s identity, instead focusing on what comes next. Ruby has often been shown to be simple minded and more aggressive than Sapphire, so it is nice to see the opposite here, with her reaction being the joy of no longer being tied to someone because that’s what their leader wanted, the freedom to choose. Of course it resolves with a return of the status quo, but it is nice that Ruby returns to this understanding her own desires, rather than as some kind of duty.

Realistically the only issue I had with this episode is that it would’ve been nice to see Ruby do a little more on her own, as is it just feels like Steven and the rest were just hanging around knowing she’d return to the status quo. Granted, if we did get more of Ruby alone, this likely would’ve been more than one episode, which I’m not sure I necessarily want, still it could’ve worked so much better to explore the idea some more. In any case Ruby got a cool story, a fun song and the ending was lovely, so it’s definitely worth it overall.