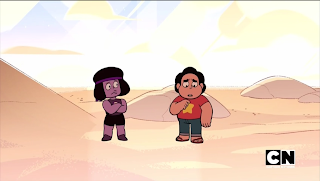 So we’re doing the Ruby episode next? Oops.
Picking up from last time, Ruby is nowhere to be seen, but Amethyst is still lying around, resulting in a search for Ruby led by Steven and Amethyst. Amethyst seems less concerned with finding Ruby and understanding how Steven feels about the whole ordeal, seemingly hiding her own feelings. Steven seems to be increasingly concerned with Amethyst, but she tells him to ignore it, until he wears her down, revealing her own thoughts are less concerning to her than Steven’s, who is just a kid, resulting in a pretty emotional pay-off to lead into the next episode.

On the whole, this isn’t the strongest episode, it is a bit forgettable, but Amethyst essentially being the Gem voice of reason is nice turn of events. Steven is still a kid, especially when next to Gems who’ve been around for thousands of years, so it makes sense that one of the Gems would figure that he’d be the most impacted by the truth of his mother, that it’s Amethyst isn’t much of surprise, but it’s a nice touch. Amethyst has continuously proven to be the Gem who can relate to Steven and humans quite naturally, while also growing emotionally throughout the show’s run, this is fully displayed in her wanting to let Steven relax, rather than continue to be concerned with the other Gems falling apart.

Again, this is one of the more forgettable episodes, but it still gets a few strong beats, especially once Amethyst stops hiding her own intentions. Steven’s acknowledgement of her growth is also one of the funnier bits in this arc, so that’s nice. The issue largely comes with the various moments around town, which never stand out and are a bit bland, which is something you’d think the show could avoid with all the rich characters found in the setting. Remove the mentions of Ruby being lost and I would have a hard time pointing out which episode I’m watching throughout the duration of the town scenes. Not a bad episode, but aside from Amethyst revealing her maturity, it’s not a great one either.