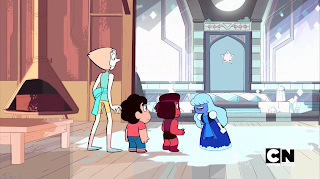 Sorry for the delay

Last time we had the shocking revelation that Rose was Pink Diamond all along, this time we get more of the backstory. Picking up where we last left off, Garnet and Amethyst are still shocked to learn the truth, so shocked in fact, that Garnet loses her form. In a surprising move, it’s Ruby who seems level headed about the truth, while Sapphire runs off and lashes out at our heroes. Trying to fix things, the bulk of the episode deals with Pearl and Steven comforting their blue friend.

At this point, Steven Universe has had more than enough backstory episodes that you’d have to wonder how many more the show can even offer anymore, but then we get charming little episodes like this that prove we still don’t know everything. It’s fascinating, that the creative team figured the reveal would be so shocking that even the characters would need whole episodes dedicated to them reacting to the news, maybe we don’t but this episode benefits from the sole focus on Sapphire. While this episode never manages to be the most shocking in terms of new info, the eventual message for Sapphire to accept is cute and necessary for us viewers to remember that Rose wasn’t a completely selfish being.

It doesn’t have the cool visuals other backstory episodes have, nor is it as emotionally strong, but I was more than charmed as it went along. Rose was kind-hearted because she was naive and a bit selfish, which is an interesting idea that isn’t always easy to tackle. I like that the episode acknowledges Garnet’s original fusion, showing more of how Rose was impacted by the idea. This isn’t the most important or shocking episode, but it’s nice to see the fallout of Rose’s truth and Rose being good despite her increasingly complex decisions. Let’s find out what Ruby is doing next time.