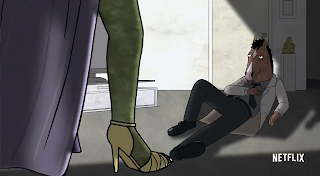 PHILBERT IS BACK!
I’m not sure if I’ve made it clear before, but I’ll do so now, BoJack Horseman is my favorite show on currently. It’s funny, unique, absurd, depressing and isn’t afraid to shake up the status quo, basically everything that would guarantee cancellation on network television. I know being a Netflix show doesn’t exactly sound like a success all the time, but realistically, this show wouldn’t have succeeded otherwise, it’s proof that there is life in streaming that cannot happen on cable. The way the show blends all the tones is simply amazing, but for now, let’s talk about the first episode of our new season.

As with all season firsts so far, the show introduces us to BoJack’s new arc, the first season dealt with BoJack’s book, two, was his dream role, three, the awards campaign, four... well okay, BoJack’s story didn’t play right away there... but this time it’s his new show. “Philbert” is the brainchild of Flip, a wannabe auteur who seems to have no clear story. BoJack, who only agreed to star after Princess Carolyn singed his name for him, has no understanding of the story, he just knows he dislikes whatever’s going on. Things get worse once BoJack pushes Flip around, resulting in Flip deciding to add a nude scene for BoJack. In typical BoJack fashion, he tries to find an out from it, leading to various mishaps, until BoJack eventually learns to just accept he is problematic himself.

There’s a lot I really dug about this episode, especially in how it sets up our season. For starters, the set looking like BoJack’s home works to the advantage of the paranoia we see in BoJack assuming he’s being punished, however it also lets us know that BoJack’s reality will eventually blur with the show. Then there’s the characters, Todd is introduced in Princess Carolyn’s apartment, reminding us where he now resides, but a failed plan leads to his new role as a head in the production company for BoJack’s new show. Princess Carolyn is shown throughout dealing with an adoption agency, so her story will be of the struggles in becoming a mother and working on set. We also get smaller things, like BoJack’s co-star, who will obviously become his new fling for the season, as well as Hollyhock being in college, so we know she’s out of the story, for the time being anyway. The only thing I didn’t really like was introducing Diane and Mr.Peanutbutter as divorced, here it just comes out of nowhere, it would probably be better as a reveal in a seperate episode.

My favorite thing in this episode, among the set ups, is that we don’t know exactly where the show plans to take us. At first we’re led to believe this may be another “Secretariat” scenario, where BoJack leaves mid-production, but before the episode closes we’re pretty much assured that’s not the case, with the characters even referencing his abrupt departures. No, BoJack does the right thing, all seems to end well for him, so what’s coming? We know how the show is, so likely not the most positive thing, plus the set hints at a reality blurring between show and life, so something must happen there. The beauty is, we don’t know exactly how, as the show just told us that he won’t leave again.

I can’t say for certain that this season will be my favorite of the show, but I can say it continues the show’s main strength in continuity, in that the character’s are growing. There’s a new status quo, the cast are building off that and what came before, no guarantees on how things will play out. If you haven’t seen this show yet, you’d better start, season five has begun and you won’t want to miss it based on this start.