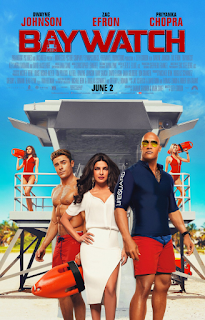 I'm joining the chorus here, but, this is no Jumpstreet.

Baywatch should be more fun than it is, I'm just gonna say that upfront. Yes, I've never actually sat through an episode of the original show, but I'm aware of its existence, as well as understand how silly the premise can be. This movie acknowledges the silly premise, but drags itself without anyone taking full advantage of how odd it all is. The Rock and Zac Efron have been better elsewhere, so much so, that I have to wonder what happened, because the marketing makes them more enthusiastic about being in the movie, than they actually look in the movie. Still, I had a few laughs, which makes me feel like what they made, wasn't the full potential of what they thought up.

Zac Efron plays Matt Brody, a disgraced swimmer, hired to make Baywatch look better, Dwayne Johnson's Mitch objects to this. Drugs found on the beach become common, leading to Mitch trying to uncover the conspiracy behind this. With the help of the rest of Baywatch, including the new trainees, Mitch will have to save the bay.

A fairly simple plot, one that is similar to the 21 Jumpstreet movie,  but different enough to work, so why doesn't it? Well for starters, the drug stuff feels like such a pointless addition, by the time the movie ended, I forgot why they were even a part of this. Pryanka Chopra, who is the most fun part in the film, even if she feels underutilized, had a completely different plan, so why even feature the drugs? Unless they were meant to drive down the profits of the beach, but they are tacked on really. The trainee stuff also feels pointless, in fact outside of a few scenes, I forgot that Brody was not the only new team member. All the unnecessary details here just slow the film down, making it drag more than it should.

Some jokes admittedly work, but not enough to care about much here. There's a running gag involving a tiny Mitch that feels underutilized, it's funny, but should've appeared more. Efron and Johnson feel half-assed in their performances, while the rest of the cast are decent, or just utterly forgettable.

I'm sorry to say, but you're better off skipping this, or just waiting until it hits a streaming service if you must watch. Everyone here has been better elsewhere, and I do mean everyone in Baywatch, so before you ask, yes, Efron did put more effort in Dirty Grandpa.