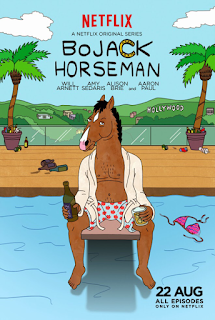 BoJack deals with his tv daughter Sarah Lynn, surprising no one, disaster strikes.

Going back to this episode after watching the last season makes for a hard sit through. The episode is still funny, make no mistake of that, but seeing Sarah Lynn drugged out here, talking about BoJack as a hasbeen, feels a lot more uncomfortable once you know where her story is heading. I'm not spoiling that until we get to that episode, but it definitely feels as if the creator at least had an idea of where Sarah Lynn was heading this early into the show. Watching this episode now feels like an uncomfortable foreshadowing, but it's enjoyable all the same.

We're introduced with a background to Sarah Lynn, the youngest in BoJack's old show, "Horsin' Around", much like other child stars, Sarah transitioned to adulthood by putting herself in some risqué material. Though her current, drugged, persona is played up for laughs, we can immediately gather something is deeply wrong, even if we don't want to acknowledge it any more than BoJack does.

Eventually Sarah Lynn decides to avoid rehab by living with BoJack, a move that proves to be plagued with issues, Todd and Diane acknowledge this, BoJack refuses to. BoJack's refusal to help Sarah Lynn leads to Diane coming to the conclusion that BoJack is doing this, less to enable Sarah Lynn's own destructive path (though he's certainly guilty of that too) but to enable his own.

BoJack, after some sex with Sarah Lynn (I forgot how funny Todd's disgusted reaction of this was), finally decides to put his own foot down. BoJack's attempt at mature responsibility is met with an uncaring response. Sarah Lynn reveals just how aware she is of her destructive path, rather than fight it, she seems to embrace it, leading to her departure to find yet another enabler of hers. Meanwhile, the episode ends with a pair of paparazzi birds having taken photos of BoJack having sex with Sarah Lynn.

This is another funny episode in the show, even if some of it feels a little more awkward knowing where this will end. I'll admit though, I wasn't too into Princess Carolyn's subplot, which involves her trying to woo Sarah Lynn to be her client. The Andrew Garfield jokes though, not gonna lie, I laughed way more at those then I probably should've. In any case this is another winner for the show. 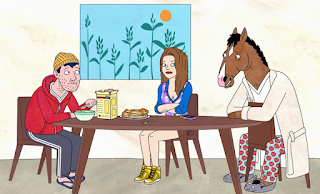