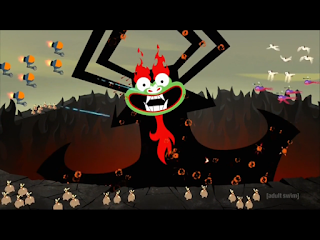 It's finally here, the series finale of Samurai Jack.

A lot of people seem to be disappointed in this, part of me can't fathom why, yet somehow I understand. With how long we've followed Jack's quest, no ending would ever be favorably responded to by all fans, it's a simple truth. What's my personal thoughts? I actually liked this ending a lot, maybe a few extra minutes would help (not another half-hour though) but I don't quite agree that it was too rushed. The story presented didn't need much more to be told, at most I just think a few extra minutes showcasing the future without Aku might've had a nice emotional for the show as a whole, but not necessary. In short I am not disappointed with the episode.

Continuing from last week, Jack is being held captive by Aku and the mind-controlled Ashi. In what is both a big "oh crap", and hilarious moment, Aku replays the intro from the original seasons to the world. This scene only gets funnier once Aku realizes one thing, he doesn't quite know how to kill Jack, after all, he's been hunting him for years, how can he properly feel satisfied killing Jack?

Shortly after deciding Ashi should kill Jack, we see a lot of characters from the show's past, like the Spartans, the dogs from the first episodes, the Rave kids and the Scotsman among many other fan favorites, come to rescue Jack. This leads to what's an epic, but ultimately pointless battle for them, they can't truly harm Aku, so this is mainly to distract him as Jack tries to bring Ashi back to her senses. It's fan service, but its brief, awesome and necessary, which makes it work.

Jack eventually snaps Ashi back to control, which leads to a surprising revelation for her, she can control her father's powers as well. Ashi, with her new powers, decides to stop Aku the one way she knows how, by creating a time portal. After a recreation of the past battle, we see our Jack come in to kill Aku (who is hilariously shocked at how quick he came back) in a fairly simple battle. Some people seem to take issue that the final battle between the two was so simple, but you have to consider, Jack's sword was made to defeat Aku, so it makes sense that the epic Aku battle we expected would not come to pass between Jack and Aku.

Thus Jack's ending is quite happy. Jack and Ashi gear up for a wedding in the past, only for one major twist to Jack, without Aku, she no longer exists, thus leaving our beloved Samurai with yet another sacrifice. The show closes out as we see Jack accept the loss, as he, much like us, stare at a now beautiful and hopeful future ahead.

Again, I really like this, was it epic? No, but emotionally it felt so right and true to the show's tone. Jack has always sacrificed, so to see him make one last one for a happier future made sense. The friends he met might not exist, but the world is better without Aku, his purpose is fulfilled. Thank you Genndy Tartokovsky, this was the best show on Cartoon Network and may end up remaining as such. 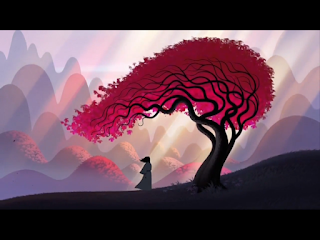