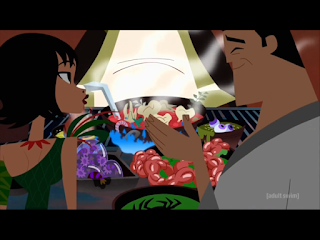 In what will feel like the closest this season has come to the previous seasons, this episode focuses on Jack and Ashi encountering a deadly monster. It's a cool set up, one with an unexpected ending, but this is probably the weakest episode so far this season. I want to stress it's not bad, in fact the episode is still solid, it just feels off. Maybe it's that it feels like too much of a detour from the story arc, or that it really just is the one with the weakest writing, but it ends up coming a little short in terms of  having a memorable punch (outside the ending anyway) compared to the rest of the season.

It all starts with Jack and Ashi sharing a nice walk around a public area for merchants, eventually finding transportation. The nice moments shared seem to be developing for the two a bond, possibly love as we get awkward humor between the two. There's little time to acknowledge that though, as we find out an ambush reminiscent of the elevator scene from The Winter Soldier, is brewing in their ride to Aku. The fight that ensues is cool, but definitely on the weaker side of the fights this season.

Eventually the episode's main focus is on our two heroes running from some leech monster. It's a cool villain, with a pretty cool fight scene, but I oddly find myself remembering so little beyond the humor between Jack and Ashi. Possibly the focus on Jack and Ashli's relationship is why the humor between them is the best aspect here, but I do wish there was more outside of that. The ending is definitely a highlight of the season so far though.

So we have a good but not great episode. I do like parts of it a lot, but I wouldn't mind skipping this episode in favor of reaching the end, that is unless some things in here actually matter next time, which I kinda hope they do. 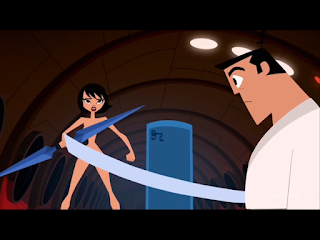