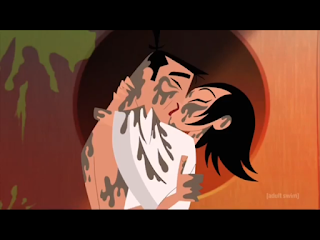 We're about to reach the finale to the show, can Jack make it out okay? This episode gives little hope.

Starting right where the last episode ended, Samurai Jack opened with Jack and Ashi embracing each other's love. It's a cute image, even if I still feel last week's episode was pretty weak overall. After that kiss we get some brief scenes of the two acknowledging each other in a more shy, yet romantic way, cute stuff, but it actually works better than similar moments from last week. The conversation between Jack and Ashi by the fire was a nice highlight, especially as Jack describes his own childhood which of course became tragic.

Meanwhile, Scaramouche finally arrives at Aku's door step, on a squid's body which is a charming little visual for him. He faces small disappointment as he finds an Aku (drive-thru?) speaker, it's perhaps the funniest scene in the episode, but Scaramouche's disappointment is obviously destined to get worse.

Back with Jack, we find he's left Ashi, who quickly notices. Ashi asks the obvious question, why? Why did Jack leave her? We know Jack must have a reason, as we've known him long enough to know he's not a love 'em and leave 'em type. Jack reveals how he fears he'll lose her like he's lost everyone else he cared for, an emotional bit that is ruined by a now confident Aku. Aku overjoyed with the thought of Jack having lost his sword meets up with the samurai alongside Scaramouche, but upon realizing that was no longer the case, Scaramouche is quickly destroyed, sad way to see him go really. Of course, just as Aku was leaving, he quickly finds a way to hurt Jack personally, as it turns out, there was a reason why Ashi and her sisters were called the Daughters of Aku, they really are. What happens after that reveal is a sad, if not intense battle between Jack and a controlled Ashi, as Aku sits back and laughs.

With Jack refusing to kill Ashi, Aku finally claims Jack's sword, leading to our end this week, as we see a watercolor drawing of Aku claiming victory as Jack sits as a failure, a shocking moment for fans to be sure. I am definitely pumped for the finale next week, but I can't help but worry that it may be rushed given the amount of story that will have to be covered in a 22 minute episode, still I feel confident it will be worth watching. 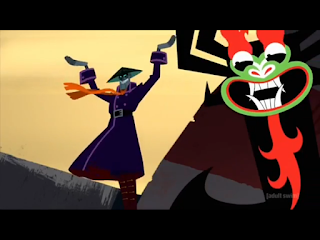