GUARDIANS OF THE GALAXY VOL.2-REVIEW 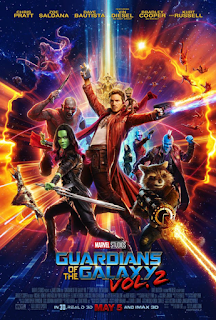 Guardians of the Galaxy is easily my favorite of the Marvel films, going into this one, my biggest question was whether or not a sequel could top it, or at least equal it.

One thing that I believe everyone can agree with, is that James Gunn (writer/director) is great when it comes to characters. Guardians of the Galaxy Vol.2 builds upon the great cast of the first, allowing everyone to have at least one major scene-stealing moment, which is impressive. Before you ask, yes I do mean everyone here, while I absolutely loved the first one, going so far as to say it's the rare movie that feels perfect, I can't deny some characters, specifically on the villain side, lacked memorable moments; and that's coming from someone who actually liked Ronan! This time, I felt the writing was somehow even better than what already felt perfect, every major villain of the film (yes more than one) truly shines, with dialogue so hilarious it almost feels unbelievable. The true strength of course comes from the heroes, as we see conflicts, hinted at, or even brought up from the first film expanded upon here, resulting in some real tearjerker moments. In fact, without spoiling anything, once we see our main villain launch their master plan, we are so invested because our heroes are emotionally invested, it's perhaps the most emotional climax in any Marvel film, with of course a great song to amp our feelings.

What perhaps, really stands out for me here, is that the Guardians really do feel like a family. You've probably already heard that this movie is about testing our heroes bonds, which it truly is, these characters just bounce off each other so well, that even when they're separated, we still get a sense of how good their camaraderie is. Yes, our heroes get separated for big chunks of the film, but it's all in favor of an emotional story that requires that, which may turn off some viewers, but trust me in doing that, we get to see our leads evolve and grow properly, Michael Rooker's Yondu especially benefits from this as his connection with Rocket ends up being the heart of the film. While I loved the first film's decision to have the team bounce off each other all throughout, I respect, and even admire the choice of splitting them up this time, it allows for a different story, with different conflicts to hammer home the point that these misfits are the perfect family. This almost feels like the opposite of The Avengers, who, as much as I love their films, don't really feel like a family, in fact when they split up, it never hit as hard as it does here.

Much like the first film, the comedy here is some of the best of the Marvel movies to date. The one major difference seems to be that it is a bit more broad this time, with a lot more humor that would probably be easier to translate, compared to the first one anyway. Still, I laughed hard several times, especially during Stan Lee's cameo which has become my new favorite Stan Lee cameo (side note,  does the appearance of "blank" with Stan mean the Fantastic Four are back with Marvel? Or how does the rights work there?). My greatest relief with the humor though, is that Gunn still goes as adult as he can, which was something I was worried he'd be restricted from doing for the sequel.

Just like the first film, the effects are gorgeous, plenty of visual wonder is bursting through all the color, which is all amazing. I've heard some people say all MCU films look the same, but I'd have to respectfully disagree with them, Vol.2 looks like no other Marvel film (aside from Vol.1 of course) and even when we get brief settings reminiscent of other Marvel films, the team behind this know how to play with them enough to still feel fresh. One of the earliest sequences of the film involves the Guardians in a conversation with the Sovereign, a new group of villains for the team, while this scene sets up how fun it will be to see Ayesha desperately try to kill our heroes, it also just oozes in beauty with the scenery, I can't think of the last time gold look so beautiful in a live-action film.

The film's biggest strength though, is the heart. I feel like Vol.1 had the better soundtrack overall, but the way Vol.2 uses it's songs is far superior, with Fleetwood Mac's "The Chain" getting perhaps the most emotional moment I've seen in the MCU yet. Seriously, I'm probably gonna repeatedly listen to only half the songs used in the actual film, but the scenes with the songs, along with how their used sticks out for me so well, I almost wanted to overlook acknowledging that Vol.2 has a weaker list (not bad though) of songs. I bring this all up, because the heart here is what drives the use of music, making for a film that fully utilizes and understands how to use the soundtrack it's been given.

I've wrestled with the thought, but yes, Guardians of the Galaxy Vol.2 is superior to it's predecessor. It's the rare sequel to a perfect film that feels just as perfect, if not better than perfection. I laughed, I nearly cried, I sat in awe, I felt hatred for the villain, especially upon a surprising reveal regarding their past. Thank you James Gunn, I can't wait to see what you do for Vol.3, everyone else, what are you waiting for, watch it now. 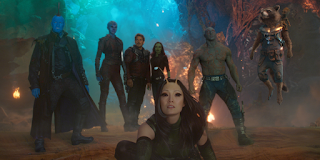