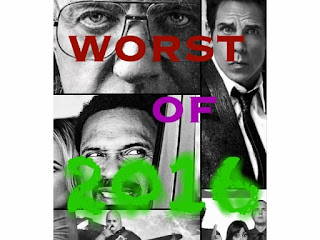 Well it's that time of the year, what time? Well, if the main image there wasn't a tip, it's time to talk about the worst movies of the year. Keep in mind, I haven't seen every film released in 2016, but I have seen plenty. This list isn't about how a bad a film looks, or if it is the worst in technical terms, no, this list is about which films hurt the most to sit through, the ones that turned out worse then expected, even if what I expected wasn't much. Keep in mind, this is my list, not the end all, be all list of worst movies, so please, be respectful, now for some not-so honorable mentions.

P.S. Some spoilers will be found here. 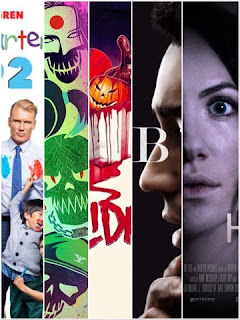 Just so we're clear, none of these are runner-up films, that is to say, none of these are "worst movies numbers 11-15", some may come close however. For example, number 11 would probably be Jane Got a Gun, but I don't have much to say about that movie, beyond it being boring. These are all just movies I felt like highlighting what was wrong with them. In short, these stood out, but not enough to make my list, here we go.

KINDERGARTEN COP 2-This straight to video mess is just that, a mess, it's dumb, representative of the worst traits in film sequels, and just terribly unfunny. On the bright side, it didn't feel long.

SUICIDE SQUAD-I've stated before, Leto plays the Joker like a James Franco impersonator, who is trying to act like the Joker, while still being Franco, it's awful. I kept this one out of my top ten because it has some charm with a few of the leads, Voila Davis is kickass in this movie, Smith is good, Jai Courtney is amazing, but man does it still suck. Sorry DC, I'll praise you when you stop making disjointed crap.

HOLIDAYS-An anthology of holiday themed horror films? Awesome, sadly this is not, the stories lack connection to their holidays in most cases, while also just being boring. A few shorts do help make this a somewhat worthwhile sit though.

BARRY-I love Obama, he's been a great president and I'll miss him, but did his film have to be so, unoriginal? Barry, is by no means an awful film, in fact it's fairly decent, it's just uninteresting. I'm sure there's plenty accurate here, but the film tells Obama's story with the same approach given to white historical figures, not awful I stress, just nothing to make this feel unique, which is pretty bad for a unique man.

HUSH-Home invasion films are boring, they truly are, so what can help them feel unique? Gimmicks, unique heroes, all that stuff. So, why does Hush feel boring with it's deaf hero? Because aside from a few instances, this never takes advantage of the potential there. I enjoyed bits here, but when all was said and done I walked away not caring.

Now, on to the worst starting with... 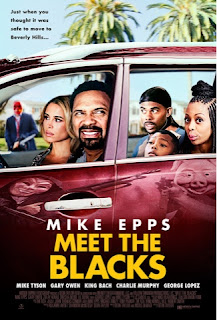 This movie was a big disappointment, yes it surprisingly is. I don't think any trailer made this look particularly interesting, but the concept is honestly a good one. Imagine The Purge, but from the perspective of the people most affected by it, minorities. Sure, those movies aren't great (the sequels are pretty solid though), but this was disappointing because there is room for a lot of great jabs at that franchise, specifically how little the minority view is represented, despite those movies being a metaphor for what America does to people of color. Sure the Purge sequels featured more diverse casts, but realistically the center in all of those films were still white leads, so this could've been a great comedy highlighting that. Meet the Blacks features a few smart jokes at the expense of white people purging (why even do it in a nice spot?), while also offering some funny reactions from it's lead (he doesn't believe in the Purge at first because, well plainly, ghettos are kind of already like that in his mind), but so much just falls flat. Great idea, terrible execution, much like the original Purge, how ironic. 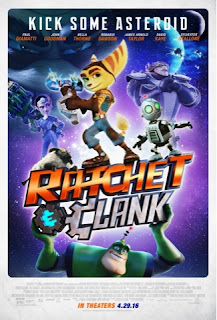 There were a ton of videogame adaptations in 2016, I didn't see all of them, but I have seen Ratchet and Clank, at least I think I did. This was such a forgettable, boring film, I honestly forgot about it until I ran through my list of movies I'd seen this year, but once I remembered it, I knew I had to have it here. What makes Ratchet and Clank sort of stand out is that it's proof that cutscenes do not necessarily translate to film. Yes, if you weren't aware, this movie is actually a collection of cutscenes from the recent entry in the game series, which makes the whole film underwhelming, largely because anything that happens has to stay in the realm of those cutscenes, so no action ever gets too crazy,resulting in a boring mess. Add to all that some poor animation and toned down violence (the film makes it a point to establish most, if not all destruction does not result in death), Ratchet and Clank is just a chore to sit through, but at least they have the leads from the games voicing here... Though they don't recieve top billing which is insulting.

8)THE SECRET LIFE OF PETS 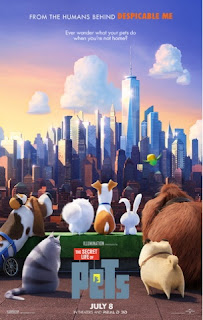 Can Illumination try to put more effort in their films, outside of the slapstick? Cause they sure need to. The Secret Life of Pets has some interesting ideas, but they never go anywhere beyond slapstick, and not even great slapstick. I honestly didn't hate this one as much early on, but as I thought about it more, it really is just a lazy mess. A lazy mess that made enough money to warrant a sequel, which I imagine will be a lazy retread of Toy Story 2, much like this felt like a lazy retread of the original Toy Story. Just please stop supporting this company, they're trash. 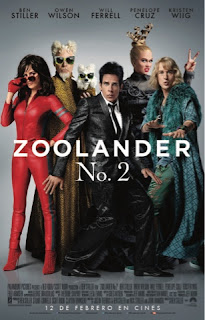 There's a pretty bonkers plot in here about the world's first model, Steve, who lived with Adam and Eve, except by the end we're told it's just b.s. Mugatu then insults anyone who believed in that. Add some jokes that never land and you've got a bad comedy sequel, I honestly feel disappointed and ripped off. 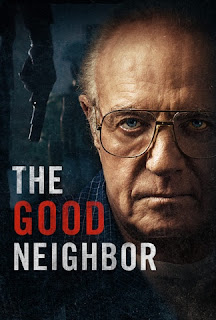 Here's a horror film with a pretty good concept, what if we had a haunted house film, where the house was not haunted, just manipulated? As we see the movie go along, we find that the man being spooked might be crazier than we imagine, but we also just grow to dislike our incredibly moronic leads. I don't want to spoil it all, but the leads are just unlikable trash, the supposed deranged old man twist becomes apparent as we inch closer, making us feel more hate for the leads and there's never a real scare. I secretly wished the leads would've been killed by the end.

5)NORM OF THE NORTH 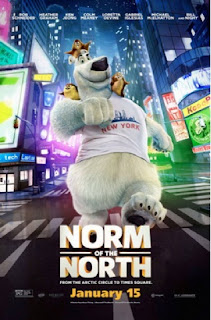 There were some pretty awful animated films all year, this was the worst, by a wide margin. Norm of the North is representative of the worst that animation can offer, poor animation, poor acting, poorly thought-out jokes, including a lot of fart jokes, but if you need a definitive reason why this sucks, here it is, twerking polar bear. Global warming, do your job. 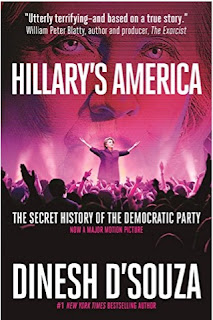 I'm a Clinton supporter, but that's not why this is here so high. As far as documentaries go, I haven't seen one so full of shit in years. The supposed secrets this movie offers are either bullshit, or facts that ignore the obvious fact that things change over time. I honestly would've put this a little higher, but that implies this movie had a bigger effect than it did. No one with a brain agrees with this trash, Dinesh, your awful films have no effect on the world, stop acting like you had a real hand in the results of this election, you're a joke. As much as I hated your film, I'm sorry to say I hated others more, but if it helps you're the biggest asshole on this list. 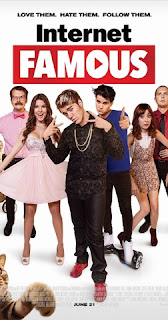 This unfunny mess was a thing, oh fuck was it a thing. Internet Famous is just one unfunny gag and delivery, one after the other, that is until we reach the last half hour, which becomes a test of endurance. No, seriously, the film has this online stage competition that just drags, featuring some of the unfunniest gags I've sat through all year. What's especially odd is that the film features some YouTube celebrities (most of which I only barely know) acting out as parodies of popular videos, but as far as I know none are relevant. I mean, if you've got people who actually do stuff on the site, why do the parodies all feel like jabs to stuff that hasn't been popular for quite a while, like if this were accurate, wouldn't there be a let's play contestant, or a reactor? Granted I'm not sure those would make for a funnier movie, but still at least try to mock something that is still popular. 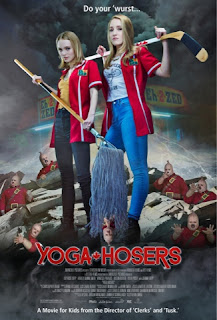 Kevin, baby, sir, Silent Bob, please just stop. I'm not gonna act like the man isn't funny, but his movies sure haven't been in years. Yoga Hosers is a test of endurance for the entire 90 minute runtime, a painful, unfunny one. This movie considers the phrase "soory aboot that", to be a funny enough joke to make the entire running time feature jokes in a similar fashion, which gets tiring after one second. Johnny Depp also shows up to help the girls, proving he can be more awful than his performance as the Mad Hatter would suggest. Kevin if you read this and are hurt, will, I still consider myself as a fan of yours, so "soory", but please try harder.

1)BATMAN V. SUPERMAN:DAWN OF EVERYTHING WRONG WITH GRITTY REBOOTS 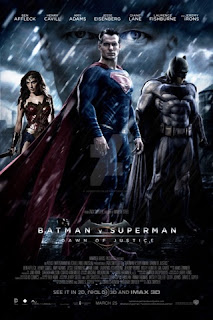 As if you're surprised, the negativity around this one led me to make so many posts discussing what was wrong with it, I honestly can't think of much to say that I haven't. Sure, Affleck was good, but the depiction of Batman here is awful, Wonder Woman was cool, but pointless and everything else just sucked. You all know the Martha bit is stupid, yes I've heard the rebuttals, but I've got one too, you're wrong. Batman crying about the name Martha, a name that Superman randomly brings up out of convenience (realistically, wouldn't he have said save my mom? Or is Superman just disrespectful regarding his parents?) was awful writing. I knew this was going to be bad going in, somehow knowing everything that would hurt, didn't make the pain any easier to take, this was a slow, boring mess for 2 and a half hours that I will never reclaim. I plan to never watch this shit again and neither should anyone else, easily the worst movie all year, as well as the worst superhero movie ever, which is impressive considering that means this is worse than Steel, Green Lantern and even Fant4stic, just stop guys, please do.