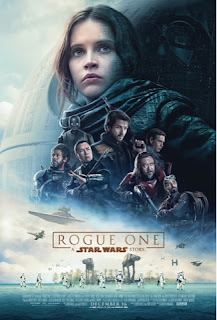 Disney's latest is a test, a test to see if they can make a Star Wars film, outside the main series, and they've nailed it. Sure, this is basically just another tale, but it feels different enough to give hope for the future of the franchise, a future that isn't restrained by making everything about the Skywalker clan. Oddly enough though, this also comes at just the right time, where a little hope is needed in the real world. 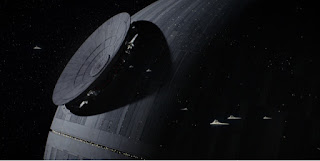 A prequel to the original trilogy was not exactly high on anyone's list of desired films, but that's what we get with Rogue One. What we recieve with this installment is practically covered with the opening of A New Hope, the Empire has a deadly weapon, some guys from the Rebellion captured the plans for it, and the Princess is on the run with those plans. The main gimmick to this film, is seeing just how deadly it was to steal the plans, as well as perhaps fleshing out some plot details from the original film, specifically one that has been mocked by fans, "why was the weak spot so obvious?" Well as we find out, the reason is because the designer of the Death Star wanted no part of its creation, but was forced into it. You'd think a prequel like this would be easy to predict, and partially, it is, but as the film is just about some rebels we've never met before, we quickly find the film becoming a little less predictable, at least regarding the leads, after all they undertake an important task, why don't we see them in later installments? I won't spoil the answer to that, but trust me, this movie has guts, especially considering it's a film in a massive franchise. Turns out, a prequel was exactly what we needed as a sort of break from the main series. 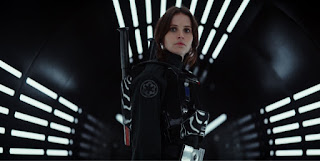 Our lead in this film is Jyn Erso, a young woman played by Felicity Jones, she's the daughter of the man tasked with designing the Death Star, a fact that has left her lost, as well as always fleeing from the Empire by whatever means necessary, making her the first "scoundrel" leading any of these films. She is pretty badass in the film, and her interest in the rebellion is never clear, as her main focus seems to lie in her father. Even as her goal becomes the recovery of the Death Star plans, there's almost a sense that she's probably doing this for her father, more than to help the galaxy survive.

Along the way, Jyn is rescued by a pair of rebels, Andor and K-2SO (Diego Luna and Alan Tudyk respectively) who are to escort her to get close to a dangerous enemy of the Empire, one who is acquiring important Intel. As this mission is taken we meet a few more new faces, including a blind warrior who believes in the force (Donnie Yen), his assistant played by Wen Jiang, and a defector of the Empire played by Riz Ahmed. None of these new characters are bad, but outside of Luna, Tudyk, and Yen, no one ever gets to shine, which is a shame, because everyone is putting the effort. I imagine many will agree on one thing though, K-2 is the best new Star Wars character, someone get to making this guy a real robot, cause children and adults will want him yesterday, that's how fun he is. A good cast to be clear, but you can almost tell these aren't meant to be among the main cast of the franchise, which is fine, they get this story, which works for them. 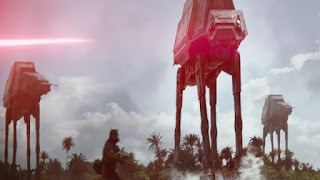 However, if there is a major weak point to this film, it's the shout outs to the franchise. I get it, references will be made, but must they be so in your face? Marvel remains the best at maintaining universe building, this film does little to challenge that. The references get so distracting, that when we see a certain character appear in the film, one who's being brought to life with that de-aging cg effect, it ends up being less of a distraction than a small gag with a pair of iconic droids. Side note, that de-aging effect? It isn't perfect yet, but it's gotten so much better, how much? You almost forget the guy they're using it on isn't even alive anymore... Yeah. I like references as much as the next geek, but going forward I do hope these movies make them more subtle than a camera focusing on a random character, just because I know him from a previous film doesn't mean we should stare at him just because. 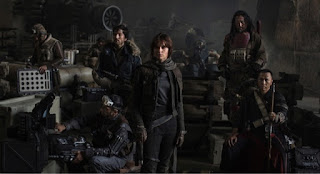 But at the end of the day, Rogue One, is here to expand the world, or rather galaxy of Star Wars, showing us that not every hero is completely innocent, or meant to hold a bigger place in the universe. These people aren't exactly a step away from the Dark Side, but their actions aren't the most heroic until we get to the third act, which is where the movie hits near perfection. Make no mistake, the movie is good all throughout but by the third act we get something so perfect, do not let anyone spoil it, you will be at awe at seeing what is easily the darkest group of sequences in the franchise, complete with a scene that feels like something straight out of a horror film. Yet, it's the hope of a better tomorrow that keeps these characters going, which probably wouldn't have felt quite as inspiring as it does now had the year gone a little better, for everyone. It doesn't make what happened in politics any better, but this feels like a nice rallying cry, it wasn't intended that way, but we need it now more than we would've otherwise. 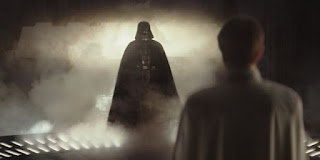 Rogue One isn't the best Star Wars movie, that title still belongs to Empire Strikes Back, but it gets close at times, and it definitely sets a high bar for future spin-offs. I know a lot of Neo-Nazis and White Nationalists are telling you to skip this movie, but obviously you should ignore them, this is a great film, one that feels inspiring in these times because Star Wars has always been anti-Nazi, anti-fascist and anti-evil, go out, support it, and stand up against evil.