No movie about a shark, will ever be better than Jaws, that movie has left so much of an impact, it's not even worth trying. The Shallows is not better than Jaws, but, there's no denying it's an effectively frightening film. 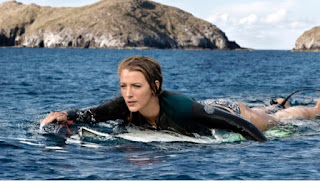 If there's a major hurdle to enjoying The Shallows, it's the first act. Just so we're clear it's not awful, the heavy lifting of the film's plot (woman gets stuck on rock, as shark roams around her) is performed here, and to its fairness, yeah it's set up naturally but still it drags. Once we get out of the first act though, yeah it's really good, Blake Lively turns out to be pretty effective fearing for her life on a rock, plus she gets a cute seagull to talk to (of course the seagull doesn't talk) and the tension is always there. There's even a time limit to her stay on the rock, as the sea doesn't remain shallow for a few hours in the day, meaning she must plan her survival before the shark can reach her. I like how smart the film can get throughout her struggle, because it means the film doesn't rely on stupid choices to create tension, and if stupid choices are made, it's usually natural to the set up, so any time I could say "you idiot!" is spent on me being just as frightened as our lead by the scenario. So, despite the drag, I am glad that the set up pays off where it matters, the meat of the film, the second act. 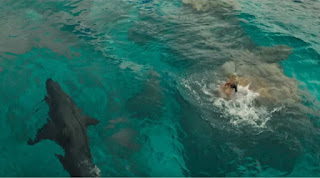 Make no mistake though, The Shallows follows up it's second act with an impressive and kickass third act. As the time limit on the rock is running out, so does Lively's choices, resulting in a terrifying fight for survival that even features Lively giving a badass "F- You!" To the shark, before realizing she might have made things worse, trust me, if there's any reason to watch this movie, it's this. I know, why can't the movie be like this all the way through? Well sometimes you need a boring first act to set up better following acts, I'd prefer this movie be great all the way through sure, but the build up to the climax is what makes the climax that much more satisfying. As the last fight settles, I was practically fist bumping the air, it's that awesome and satisfying, even the seagull gets a moment of joy, at which point I was convinced this was solid, I legitmately cared for the outcomes of the characters. 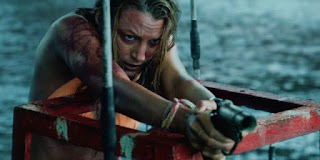 So yes, this movie is by no means better than Jaws, it doesn't come close, but it is a solid horror film in it's own right. The slow and, quite frankly, boring first act is still vital, it helps set up great second and third acts. Blake Lively kicks ass, the shark is one of the year's most terrifying villains, and The Shallows is definitely worth your time if you love a good horror film.