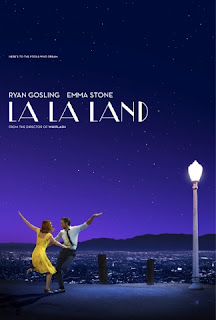 Musicals are wonderful, they are fanciful, they can be beautiful, joyous and sad all at once, while also being reminiscent of Hollywood's Golden Age, La La Land aims to recapture the magic of that era. In some regards, this is a fantastic film, but in one area it falls just short of greatness, the result is a movie that is good, but ends up feeling like a misfire. 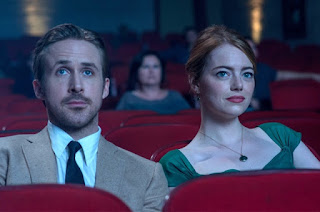 Perhaps the greatest thing about this film, the main reason I still feel like recommending this, is the visuals. This is one gorgeous looking film, from beginning to end I was mesmerized by the sets, the dancing, the color, everything. I'd be lying if I said this wasn't the best looking film of the year, the work to make this look like a classic film, set in modern day is phenomenal, in that regard, yes this is a must watch film, explosions are cool, fights are cool, but nothing this year made me as astonished as this movie, without giving anything away, the ending on a pure visual level, reminded me of the opening montage in Up, it's really something you'll have to see. I'm honestly hoping this gets released with a "everything's silent, except the music" version on home video, cause I'm curious as to how that works out. 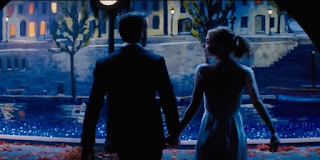 Our story here is fairly simple, it's a romance set in modern day L.A. Emma Stone plays Mia, a barista trying to make it big in the world of acting, while Ryan Gosling, as Sebastian, dreams of bringing back classic Jazz through his skills as a pianist. Mia and Sebastian meet, they fall in love, but as their personal goals start clashing, their relationship becomes harder to hold together. What follows isn't that hard to figure out, but the story isn't too focused on surprising you there, this is meant to be reminiscent of many classic romance films, as well as musicals, this is a homage film, which is fine I enjoyed it. There is absolutely no issue with the film being mostly predictable, it's a good template for a movie, the movie adds it's nice little touches, so it works, from the visuals, to Stone and Gosling's chemistry, the story is fine because of the other well done elements that it props up. 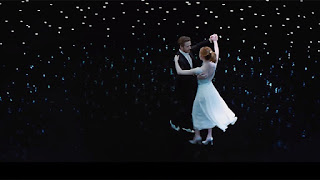 Speaking of Stone and Gosling's chemistry, yes this is good from a pure romance perspective. Emma is perfect as a down on her luck wannabe actress, while Gosling is also perfect as the guy with talent, who honestly can't keep his life together. They're adorable, they're funny, they're emotional, they're the heart of the film and they're the reason you keep watching, outside the visuals of course. I know many people (guys) look down on romance in films, but I think a good romance is vital in art, not in everything of course, but art is passionate, love is passionate the two go well together because of that passion. I've seen movies that would normally be awful if it weren't for the chemistry between leads (A Million Ways to Die in the West is decent because of the romance) and this film works because the leads are great. You can feel the love between them, the heartbreak, everything, it's a great romantic tale, I honestly believe it is one of the best romance films in years. 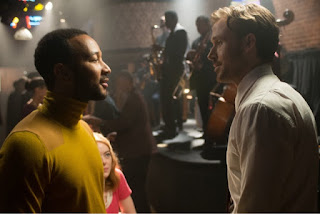 Sadly, this movie does have a weak point, one that kills so much of the quality for me, the music. La La Land looks beautiful, the actors are solid, the story is good, but the music (specifically the songs) are forgettable and perhaps a bit bland. I hummed some of the score sure, but whenever a character sang I either could not make out the exact lyrics, or just plain forgot the song's tune by the time it ended, sometimes both. I've even tried listening to the soundtrack just to see if my opinion would change, it hasn't, which sadly hurts this film big time, it's a movie aiming to be like classic musicals, having weak song numbers just makes this feel disappointing.The one song that works pretty well for me is John Legend's "Start a Fire" which, while not the best song I've heard all year, felt fresh, compared to the rest of the soundtrack. If only the film hadn't made that song be the "sell out" song of the feature, yep Stone dislikes it because it's not what Ryan wants to do, while Ryan wants to stay with just classic jazz. I honestly found myself agreeing with Legend's response to Gosling, sure the classics are good, but if you want to leave a mark you have to consider the future, thankfully the film doesn't devolve to mocking modern music styles, but just bringing it up was a bit of a pet peeve for me. To fully understand how I felt, consider this, the most memorable song in this was A-Ha's"Take on Me", granted it's a cover of it, but still. 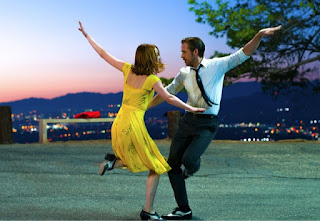 I loved La La Land, well came close to anyway. As is, this will be remembered as one of the year's most beautiful films, if not the most beautiful, which may lead to some, if not many, to ignore the movie's song problem, no song is awful, but they do come up short of being anywhere near the year's best, which sadly proves to be a real flaw. I'll still recommend this, as the movie does work in all areas outside of the songs, but if you were only coming in to hear something memorable and classic, I won't say you'll hate it, but you may not enjoy it as much as you hoped.