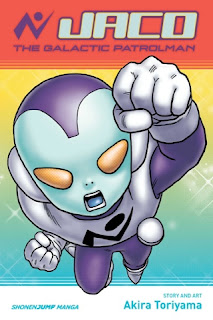 Well here's something I haven't done before, a manga review! Don't expect this to be a common feature, I'm not the most fond of Japanese comics or cartoons, but there are some I enjoy. Akira Toriyama is definitely one of the best, if not the best in the business, which shouldn't be a surprise, the man has practically defined what modern manga/anime has become. Jaco The Galactic Patrolman, is one of Toriyama's charming pieces of work, maybe not the most, but it's solid. 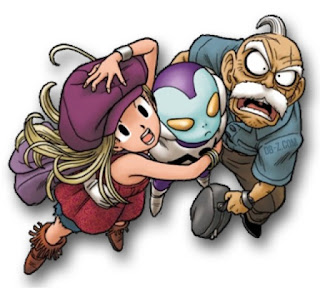 Jaco is essentially E.T., he's an alien stranded on Earth, but unlike E.T., Jaco has a reason for being on the planet, a reason I'll get into later. As Jaco tries to survive, he meets Omari, a retired scientist who offers to help him leave, but the situation is complicated when Jaco rescues a young girl named Tights. What follows is a small adventure where the threat is less about the world being destroyed, and more about the characters themselves. Omari is being forced to vacate his home, while Tights gets involved in a dangerous mission, while Jaco is on hand to observe humanity while awaiting a chance to leave Earth, after his mission is a success of course. 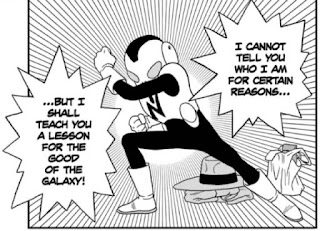 This comic's main strength is the characters of course, Jaco is another great lead from Toriyama, he's a narcissistic and incompetent hero; which is best highlighted by his constant consideration of extinction for humanity. Omari is a fine character as well, he's built like the typical "grumpy old man" character you see in a lot of stories, but the story manages to not let that define who he is as a character, there's no story arc of him "opening up" to Jaco, he tells his story fairly early in the story, he doesn't shun others, despite admitting he doesn't like people all that much, he's an interesting character to say the least. Rounding out the leads is Tights, another interesting female character from Toriyama, yes her name is odd, well sorta, but again more on that later, a fairly mysterious girl, whose background is revealed through bits and pieces, which makes her all the more interesting as she joins the tale. Outside of the leads, there really isn't much in the way of cast, we just get one minor antagonist, who isn't awful, just not intimidating, which is fine because the story is about the characters. Overall it's a small cast, but the heart and humor there is charming enough for that to not matter. 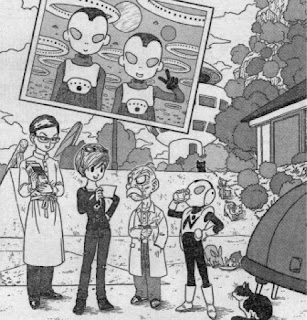 Outside the characters themselves I also personally recommend reading this for the art.I know, I know, I once mentioned I hated the anime art style, and while I still partially agree with my stance on anime/manga there, I will admit my approach to discussing it was pretty wrong, truth is I do like the art style in places, I just find the scarcity of diverse art styles in Japanese cartoons to be a weak point in the whole of anime, that being said I like Toriyama's style. Sure, Toriyama's art is distinctly anime, but you can see western influences there, with some nice depth to the character designs that is not commonly seen in many works of anime. Jaco has a nice, unique design, as does Omari, Tights is bit too much like Bulma, which would be an issue, but putting aside it being a nice design, the story gives an understanding of why that is. Even the landscapes are nice to look at, sure they're not the best, but Toriyama is a good artist so it all looks fine.

Jaco the Galactic Patrolman is a wonderful little comic, that has plenty of charm to offer. The characters are fun, the tale is simple, but it works and the comic has a likable feel to it all. I recommend reading it, even if you aren't keen on Toriyama's other works. 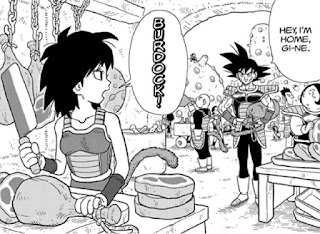 Dragon Ball Minus is a short prequel chapter to Dragon Ball included in this manga, it's a nice little tale that adds to the Dragon Ball mythos. While I'll admit it's a bit rushed (possibly to avoid contradicting the anime special, which is partially canon it seems) the story illustrates a cute look of Planet Vegeta's beginning of the end, which I admit shouldn't feel like a cute story. Still, I thought it was a nice look at what the saiyans were like before their demise, so recommended only for diehard Dragon Ball fans.

Regarding Jaco's reason on Earth, by the end we find that out and while that epilogue chapter is fine, it's a bit too much fan service. You see, Jaco was sent to Earth to stop an evil alien from arriving, Jaco's guess was that the alien would be an infant, because Earth is weak and the Saiyans usually don't send adults to weak planets. Yup, this is a tie-in of sorts to Dragon Ball, which isn't too surprising as Jaco would go on to appear in Dragon Ball Super, it's a nice connection, but there's still too much focus on the references by this point, it can be a bit distracting. I say distracting, because we soon find out that Tights is Bulma's sister, which makes her design similarity forgivable, but it's a last minute reveal that both hurts and adds to the story. I like the idea of connecting the two stories, but the flow is interrupted for shout outs to the more well-known Toriyama story, which is cute, but makes the last chapter a weak point for the story, easily put, if you disliked Dragon Ball, this last chapter will annoy you, even if you do like it, you may find that you'd rather they condense this finale to feel more like a proper ending.