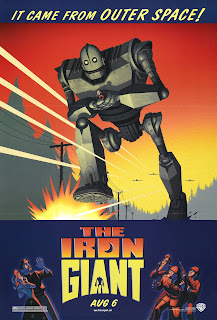 Everyone's praised The Iron Giant, but is it really all that good? Yes of course it is, that shouldn't be a question. I don't think I've ever met a single person who disliked this film, which is surprising, but in many ways speaks volumes of the film and it's impact. So why does this movie work? Well there's heart, quality animation, and above all else, a unique vision in animation that wasn't common for animated features back then, it really stands out. 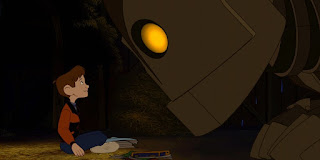 If you need a refresher on the film, here it is. Hogarth, (Eli Marienthal) a young boy, lives with his single mother (played by Jennifer Aniston) a fairly normal life in the fifties, that is until a Hogarth encounters a giant metal man (Vin Diesel) referred to only as the Giant. What follows is a tale of friendship, similar to movies like E.T., Free Willy, and various other "boy and his pet/friend" films, but unique enough to be among the best of those. Along for the adventure are Dean (Harry Connick Jr.), a beatnik, junkyard artist Hogarth bonds with, as well as Christopher McDonald as government agent Kent Mansley, the antagonist of the film.

The story is incredibly simple, but the film works because it builds on that. This is a character piece first and foremost, sure the story flows in a three-act structure, but the mellow pacing keeps us focused on the heart of the film, the relationships. It's really uncommon for animated features to be considered mellow, even back then, but I'd say it fits here;even when the stakes are raised, the movie moves at a reasonable pace, unlike a lot of other films that tend to rush to the ending once the third act begins. I think that's what ultimately works so well for me and others, the movie doesn't rush itself, but it doesn't drag itself, we're left with characters who evolve as the film ends, but not while sacrificing potential steps to that evolution, even the villain feels fully fleshed out by the end. The simplicity of the film extends to the characters, as depth begins to pile on the characters, the film's story becomes more complex, not in the execution or approach, but in the layers;it's complex but simple.

The Iron Giant resonates with a lot of people, and for good reason. At the time of it's release, most animated features tried being like Disney films, even Disney was copying itself quite a bit, but The Iron Giant felt so much more unique. It wasn't a musical, or a fairytale, it was a Sci-Fi film set in the fifties, with a villain who was paranoid, not an evil ruler, the lead isn't an outsider, he's just a kid, there's so many small decisions made that make this so unique. At one point, the military intervenes and it quickly becomes apparent that they're not morons, they're just following the words of a paranoid man, I love this because it illustrates that the movie is aware these men are competent, which feels real compared to other films turning soldiers into mindless buffoons, raising the stakes for the heroes because of that and nothing else. So why does it resonate? Because it's unique and feels more real than a lot of other animated films. Everything is natural, the movie doesn't even shy away from language, but it also doesn't force it in, which is incredibly refreshing, even now. 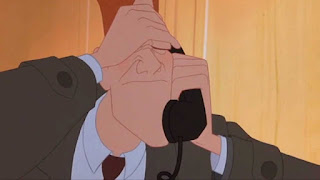 Yet, the movie wasn't a big success, I, myself was introduced to it trough a 24 hour marathon Cartoon Network held for the film at one point. Was it bad marketing? I think so, I remember seeing one trailer, which didn't appeal to me, and little else. Warner Bros. likely never realized it had a hit on it's hands, resulting in a flop that would slowly claim the audience it deserved. Watching it again I almost can't believe this was a failure, not because it's great, great films flop all the time, no I can't believe it because the film plays almost like the kinds of movies Pixar would end up making, and I don't just say that because Brad Bird (the director) did end up making two Pixar films. Flip the 2D for 3D and the film is exactly like a Pixar film, a pair of leads who grow as friends over the course of the film? Check, a story that adults can appreciate just as much as kids, if not more? Check, a villain that believes he's doing what's necessary? Check again. Maybe it was the lack of CG, or perhaps the lack of pedigree from WB's animation studio, my best guess remains to be the marketing strategy. 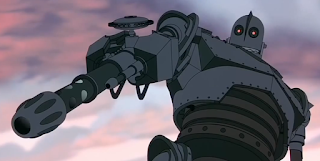 So much of this film is just absolutely perfect, I'd argue it was better than everything Disney put out in that decade alone. Yes, you read that right, The Lion King, Beauty and the Beast, and even the three Pixar films of the 90's, all good, but not as great as The Iron Giant. If you haven't seen it, I highly recommend you do, it's a hidden masterpiece that gets found by more people every year.