Imagine if Pixar decided to be really artsy in a film, the result would be this. 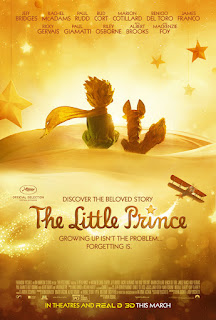 There's been plenty of animated films so far in the year, but not a whole lot were great, in comes The Little Prince, a film that feels more like Pixar than anything we've had in recent memory from the famed studio (Aside from Inside Out), which is reason enough to watch as far as I'm concerned. I'm not entirely sure why this was pulled from theaters, but it's a wonderful feature you can watch for free on Netflix, so it's not all bad, though this definitely would benefit on a bigger screen.

The story here involves a gifted child named Violet,(played by Mackenzie Foy) being put through a lot of schoolwork by her unnamed Mother (played by Rachel McAdams) to prepare for adulthood; meanwhile, Violet meets her elderly neighbor the Aviator, (played by Jeff Bridges) a man who then introduces her to tales of a Little Prince. There's a lot to like throughout the film, the complexities of the film's messages and themes, the animation(I'll get more into that in a bit) and the very mellow mood of the film, which allows for a great look at childhood, as well as a child's view of adulthood. I've heard this is based on a series of stories, with the main narrative being an original piece, which is interesting because this all connects so well, in fact it feels better connected than something like The Lorax movie, which is based on a story that features both the main and framework stories. On the other hand, the episodic nature of the film does make this film feel as long as it is, it's still entertaining, but it will be a slow sit.

The real star of the film is the animation, which is gorgeous in it's style, whether it's CG, or stop-motion, the movie is impressive to look at. While I think the CG here is on par with 2004's The Incredibles, it's the way it's used that makes it interesting to look at, whether it's the character designs, the color or lack thereof in scenes, the film plays with the animation in ways that keeps it interesting. The stop-motion on the other hand, plays well because of the effort being put forth, there's a very nice style to it that reminds me of classic stop-motion, while still feeling new, I loved it. In a few instances we get some nice traditional animation that keeps the movie feeling unique as we see all the ways this movie goes to be visually appealing. I'll refrain from spoiling much, but the movie builds to a climax, in which we see the CG use the stop-motion designs to its advantage, it's nothing revolutionary, but it adds beauty to the CG animation not seen earlier in the film, which keeps you guessing if it's a dream or not. On the whole, The Little Prince isn't the most up to date in technology, but it's certainly the most beautiful animated film of the year.

With plenty of visual wonder and a great cast, we have a strong contender for best animated film this year. Is it perfect? No it can be slow as mentioned before, but The Little Prince will keep your interest. I highly recommend seeing this, over everything else this week.