Insert Legend of Zelda gag everyone already made. 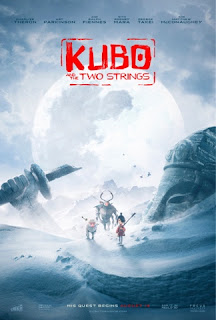 Laika at this point is on a roll, each of their movies have been really good, and this is no exception. Kubo & The Two Strings is a really good animated film, in fact it only has two major weak points, one is the twists, which are predictable, so much so that the reveals feel like they slow the movie down by a bit. The second weak point I feel is worse, but it's spoiler heavy, so I'll bring it up later. With the negative out of the way, let's move on to some positives, cause there's a lot to like here.

As far as the narrative goes, this is a pretty basic tale, Kubo (Art Parkinson) has to go on an adventure to stop a great evil, with the help of a Monkey (Charlize Theron) and Beetle, a half human, half beetle warrior (Matthew McConaughey), Kubo will need to find a trio of legendary equipment to succeed. Despite the fairly standard tale, this movie succeeds by providing great spectacle for the adventure, an early action beat involving a giant skeleton is truly amazing and needs to be watched on the big screen to be fully experienced, and that's just one of many amazing action scenes. Outside the action, we do get some really good characters to watch, Monkey and Beetle being the stand outs, which helps make the film feel like more than just some pretty imagery, which trust me there's a lot of. In the end, this may be a pretty basic tale, but that doesn't stop the film from providing its best everywhere else to really succeed.

A great cast can always make a standard tale great, after all, some movies work best with standard stories to keep the focus on the cast and their talent to entertain you. Admittedly this film has a small cast, but it allows us to love our characters that much more. Kubo is one of Laika's best leads, the emotion coming from him feels real and genuine. As mentioned before, Monkey and Beetle are the best together, but there's another pair that works here, Kubo's twin aunts (Rooney Mara as both) are creepy, as well as some of the best designed characters Laika has crafted. Kubo's mother adds some nice emotional weight to this, especially saddening when we realize she is suffering from short-term memory loss due to an accident earlier in life as she escaped from her father (Ralph Fiennes), who wants Kubo's eye for his own benefit. I'll get more into Kubo's grandfather during my second complaint, for now just know he isn't awful as a villain, but he's nothing special.

One other thing that helps make an average film better, as mentioned before, great spectacle, which this film carries in both the action and (especially) the animation. If there's a more beautiful film to look at this year, I've yet to see it, the landscapes are AMAZINGLY BEAUTIFUL at times I'd forget I was watching a stop-motion film, of course I'd remember upon seeing the nicely designed characters. All the beauty within the film helps create exciting action sequences, that feel like movie versions of Zelda boss fights. Surprisingly, my biggest takeaway for the action is just being impressed it's better than most of the action films I've seen all year.

I really liked Kubo & The Two Strings, maybe not as much as some other animated features this year, in fact I still consider ParaNorman as Laika's best, but it's a solid animated feature all the same. I highly recommend you watch this on the big screen, you will not regret it.

So, how messed up is the defeat of Kubo's grandfather? Sure I liked the idea of trying to redeem him, but isn't it kinda messed up that the people lie to him about his past? I get it he's evil, but in doing so it kinda feels like they're taking advantage of him. I was for the idea of his defeat being done through peace, but man, these guys are potentially saying it's okay to lie to someone suffering from memory loss, which is a bit messed up. Fine Kubo's grandpa is a jerk, might as well tell him he's nice to keep him from destroying more, but what if he remembers? Might make things worse for everyone. Still my biggest issue here is that it feels a bit insulting to people with short term memory loss, or anyone who has suffered memory loss really, I mean surely there was a better way to make him nice that wasn't taking advantage of his amnesia to make him nice right? I mean wouldn't it have been nicer if Kubo explained the truth, but his grandpa (in his amnesia) felt horrified by that truth, resulting in the grandpa trying to repent his evil ways? That's gotta be better than taking advatance of someone's amnesia right? Anyway this is probably just a big nitpick, but it was a bothersome moment of the film. Go see this, you won't be disappointed.