Disney continues its successful 2016 run with another remake that improves upon the original, it's pretty amazing. 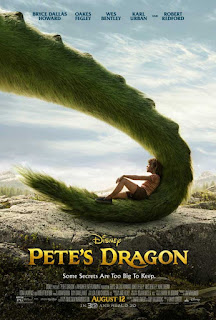 Disney is currently having the best year, sure not all of their films have been hits, but with the exception of maybe two films, all of their films so far have been praised, that's impressive. Continuing the positive streak is Pete's Dragon, a remake that surpasses the original Disney film in quality (kinda like The Jungle Book!), while also boasting some impressive effects. If Disney keeps on this streak, pretty soon people will only trust Disney to make quality features for the mass audience, that or assume Disney is paying off critics. Joking aside, this really is a good film.

The story this time is incredibly different, taking place in what appears to be the 80's, this movie begins with Pete getting lost in the woods after a horrific car crash (pull those tissues out), only to be rescued by a dragon he names Elliot after the dog in his book. The movie is fairly predictable, but that's okay, it's sweet,it pulls on your heartstrings, while at the very least making their characters three dimensional, which keeps the interest going, even when you know where everything is going. I guess I can't fully fault the movie for being predictable, after all it's following a few films that share similar plot points (The Jungle Book,  and The BFG), but I can't help but feel like the effect is lessened by following those movies in such a short time span, who knows maybe a revisit in a year or two will make it better. As is, the movie is still solid, just keep your expectations in check, this is a small, simple adventure in the vain of a classic fairytale, which I know is no longer common in family films.


Of course the best reason to watch this film is Elliot. Sure, there are great actors here like Bryce Dallas Howard, Robert Redford, Karl Urban (who makes a one-dimensional character feel very human by the end) and of course Oakes Fegley as Pete is really good too, but Elliot is the character who truly shines. I prefer the 2D Pete, visually, but this Elliot is still adorable in every scene he's in, he may be a dragon, but he acts more like a dog, occasionally like a cat, it's all effective in making him the perfect pet/best friend. There's a lot of heart brought by Elliot, enough to make him one of the stand out characters of the year, I honestly can't even picture the people who disliked this movie hating Elliot, he's that lovable.

There's really not much to say, this movie is pleasant, adorable and it will get you emotionally invested, sometimes that's all we need. Sure, the movie is fairly predictable, but it's a warm, nice sit through. It's better than it's original counterpart and it's one of the most touching movies of the year;by no means the best, or among the best of the year, Pete's Dragon, is worth your time, give it a watch and fall in love with Elliot.