WARNING:This is a spoiler article discussing scenes in Sausage Party, please skip this until you've seen the film, trust me it's funnier if you go in as blind as possible on it. 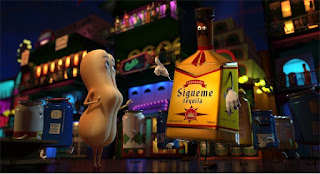 Alright you need to understand one thing, something can be offensive, while still being entertaining and smart, thing is what offends some people is sometimes a harsh truth. I don't demand you to not feel offended, I'm just asking you to try to understand what's offensive in Sausage Party may not be as mean-spirited as the surface suggests.

One more thing before I start, IF YOU USE SJW, FEMINAZI, OR OTHER STUPID HATEFUL BULLSHIT UNIRONICALLY, I DO NOT SUPPORT YOU, FUCK OFF WITH YOUR STUPID SHIT, NO ONE WORTH A DAMN, RESPECTS MRA MORONS, BIGOTS AND OTHER ONLINE SHIT HEADS! Am I understood? Good.

Is Sausage Party offensive? Yes, that shouldn't be a question honestly, but if you're wondering if it's a mean spirited insult, the answer is no. Yes, I'm aware the still being used here shows a tequila portrayed as a stereotypical Mexican, but no I didn't find that offensive, surprising be cause get this, I come from a Mexican background, both my parents are from Mexico, yet still I found this okay, shocking I know. I acknowledge that this movie is filled with stereotypes that are quite offensive, but I also acknowledge the jokes here are either too silly and "punny" to be all that cruel or mean, while a lot more of the stereotypical food is kind of based in an uncomfortable truth, we add stereotypes to our own food.

As someone with a Mexican background, I'm very familiar with Tapatio, a hot sauce that features a stereotypical Hispanic figure on the logo, does it offend me? No, but it does look stereotypical. What about Uncle Ben or Aunt Jemima? Don't they feel stereotypical? Ever seen a Pizza joint featuring a stereotypical looking Italian on the box? In fact have you noticed certain packages are designed in ways that make it apparent where the food originates from, it's not exactly cruel, but it is something you start noticing when you think about it. Sausage Party may have offensive stereotypes, but we created those in our own food products, and we continue letting them exist, whether we intend to or not. Also, before you bring it up, yes making fruit gay is clearly just done for a cheap pun, but on the other hand, we did decide one day that being "fruity" was a gay thing.

So yes, Sausage Party is offensive, but it's not rudely insulting, some of it is just silly jokes, some of it is making a point while being offensive, but no I don't think it's mean spirited. Yes, a lot of it is gross, a lot is based in stereotypes, but this is a smart enough movie that knows how to utilize those things, a lesser movie would've lacked the satirical punch this provides, while oddly enough making a much more restrained sex scene.