I'm trying DCEU, I really, REALLY, am, I want to like one of your movies, but you keep missing so bad, just please try something new already. 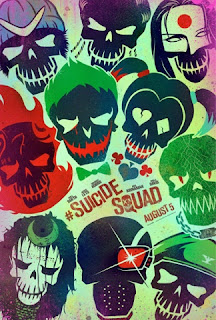 I know I shouldn't be surprised, after all this is following two of the worst superhero movies I've ever seen(Man of Steel, Batman v Superman), but yes Suicide Squad is a messy disappointment. I know trailers aren't always the best representations of movies, but I haven't seen a movie with a fantastic trailer suck so bad in quite some time. Suicide Squad feels like a movie made just for trailer footage, cause the coolest aspects of this film fit well in trailers, but don't feel like they exist in a cohesive story, which sucks because there are good things in the film.

Just so we're clear, there is a story in this film, it's easy to follow and is where the movie stumbles the most. Basically, government official, Amanda Waller, wants to assemble a task force of bad guys, why? Because they're capable of doing amazing things and are easy to blame for any mistakes that may occur it seems. I get the idea of a "Suicide Squad" and its use, but the movie fails at portraying a situation where their use is necessary, after all, if Amanda Waller could call Batman at any time, why use a team of villains to take down the Enchantress? I guess partially because the Enchantress is her mistake, but even from a "covering up her mistakes" standpoint, Amanda Waller calling some heroes to come in seems to make more sense, at least they won't constantly try to run off. Also there's a big portal in the sky, if you thought that was annoying in MCU films, this one will be worse considering it makes even less sense to even be here.

What honestly made the story worse, was the editing, which ranged from pretty good, to slowing the whole movie down. Some characters get multiple intros, others are left with short intros, but it all doesn't matter because we barely get to see the team bounce off each other, with things happening for no reason, but because they got a laugh in the trailer. What also doesn't help is the use of music, clearly the trailers had an effect on the movie, because most have no reason being in the film.

It isn't all bad though, the cast is fun enough to help it out a bit, which makes this less boring for a sit through. Viola Davis as Amanda Waller is menacing, even if she just talks throughout most of this film, you always get a feeling that she's in control of everything. Leading the villains is Will Smith as Deadshot, who never stops being fun in the film, even if he's not wearing his mask as much as he should, Will brings a lot of charisma to the role. Margot Robbie isn't perfect, but I can see the potential in here for a better Harley Quinn, which is what I can say for Jai Courtney as Captain Boomerang, and Karen Fukuhara as Katana. A bit stereotypical is Jay Hernandez as Diablo, but outside of the gangbanger stereotype, I quite enjoyed him here, he just needed a rewrite to feel less racist. With all that, the weak links in the cast end up being Joel Kinnaman as a forgettable Rick Flag, Adewale Akinnuoye-Agbaje as a Killer Croc who only does mugshots throughout the film, and Cara Delevingne as the Enchantress, a villain who is just dancing throughout most of this while her horribly CGed brother just walks around like a Mortal Kombat villain.

As for the worst aspect in the film, the Joker himself, played by Jared Leto. How sad is it that within the past year, DC has put out the worst versions of their most iconic villains, Lex Luthor in the last film and now the Joker in this. There's no reason for the Joker to exist in this movie outside of Harley's origin, yet he plays a part in a subplot that doesn't affect the story in any way, worse yet, the movie completely misunderstands the dynamic between Harley and the Joker. This all could've been fine if Leto was great, but he's not, he plays the part as if he's a James Franco impersonator, trying to play the Joker while still being James Franco, which is nowhere near as fun as that sounds. His existence doesn't affect anything here, he never interacts with any squad members outside of Harley and he is just a chore to sit through, he sucks.

In the end, I guess I can say the movie had its bright spots, with some of the actors and some of the action, but it all gets bogged down by the rest of it. Is Suicide Squad the best DCEU movie so far? I think so, but that's only because the bar is low, if you have to watch this, I'd recommend waiting until it's at a very low price. There are brief moments of fun entertainment, these villains play more heroically than the heroes we've met so far in this universe, but as it turns out the best here, is still not as good as the MCU's worst.