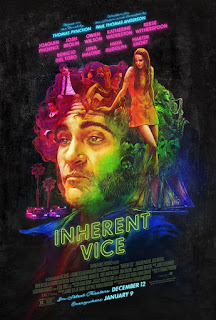 Synopsis-Private investigator Larry "Doc" Sportello, finds himself in a case that involves a former lover and her current lover. As their mysterious disappearance throws him into a lot of cases that seem to connect, "Doc" will have a hard time navigating through them all, though largely because he's too stoned to really see the entire picture.

Okay, before I go any further, I just wanna say,  Joaquin Phoenix looks like a stoned Wolverine in this movie, not sure why I made that connection, I just did.

The noir genre has been a fairly popular genre for a very long time in cinema, there's just something about following a good mystery, that even when the genre's tropes have made it fairly easy to figure out who's gonna end up doing what, the suspense still manages to make it a fun journey. Inherent Vice, manages to make the guessing harder due to one key element, our lead is stoned out of his mind. While complicated films can ruin themselves, here the complication seems fitting, we're pretty much following the POV of Doc, who is so high throughout the film that a more simple streamlined story would seem like a disservice to the film. Truth be told, the film's main weakness comes with the narration, at times it feels proper to the film, at others it feels a bit much and unnecessary.

Phoenix is one of those actors that I find myself mixed towards, I can't stand him in films I despise, but amazed when he's magnificent, his Doc is easily one of my favorite detectives on screen, as well as one of my favorite stoners in film. Josh Brolin as Detective "Bigfoot" is great as a foil for Doc, his interactions with Doc often lead to the most fun moments of the film, thankfully he never really changes, he's an ass to Doc from beginning to end. Owen Wilson as Coy Harlingen evolves from a side case, to something bigger as the film progresses, he's fine in the role but winds up feeling less like a character and more like a plot point being tossed around. As the film moves along the film's supporting cast grows, there's a lot of fun performances from Reese Witherspoon, Benicio del Toro, Hong Chau, Martin Short and many others. Katherine Waterston plays Doc's ex-lover Shasta Fay Hepworth, she's fine but never really transcends her status as a plot point, she just never stands out.

While the film certainly has it's weak points, the film manages to overcome the weaknesses through it's great lead performances and fun writing. While the story gets complicated at times, it works, the twists and turns just create a psychedelic feel to the film that fits the mystery as it expands and slowly reveals itself as a much smaller issue. Phoenix is the film's guiding hand, even if his guiding is bit wrong, Inherent Vice is a fun mystery film, check it out, though try to avoid the pot, Doc will supply enough of a high for you.