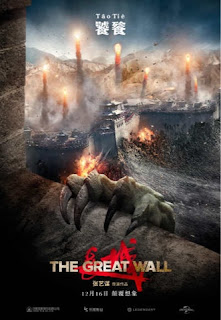 Is this just another white savior tale? Or is there more to this movie about Matt Damon in ancient China? The answer is yes, to both however odd that may sound. This is not a very complex film, at least from the narrative standpoint, once you get to the cast, there's where it starts getting more difficult to talk about. Because the film stars a white actor (Damon) in a setting and story that's predominantly Chinese, the movie has become a bit controversial in some circles and rightly so, it doesn't mean the actual film is bad, but there's a discussion worth having, even if the film is about as deep as a kid's understanding of war. Hollywood, is widely known to often take the importance of people of different backgrounds away, usually handing lead roles to white people, especially men, we get that here, but the subject becomes more interesting once you realize this film was made by China. If you're still shocked by that, don't be, China has become very dominant in the box office as of late, so it was only a matter of time before they decided to get into the film business as seriously as America has been for most of film history. 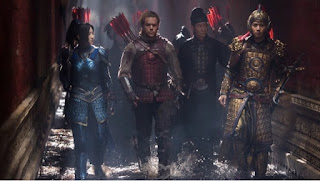 The question then becomes why Damon? why not just stick to the people living in China? The reason being seems to be because getting Damon would make the film look more "authentic" as a Hollywood film, despite being from China. The bright side being Damon isn't taking a role away from anyone of Chinese descent, the downside being he's still the lead, giving him greater importance to the story at hand than the real heroes involved. Sure, Damon's whole arc is being amazed by the ways of the Chinese army, learning trust and respect, while ultimately just being the character who helps the real hero (Jing Tian as Commander Lin) end the war. In that moment it becomes easy to forgive Damon in the film, but then you remember he still does most of the heavy lifting to get to the point where Lin (an admittedly cool character) can save the day. I don't want to seem like I'm picking too much here, but if Damon is just meant to be impressed by China, why is he always the one doing the important plot stuff? I get that as the lead he must do plenty, but it's not like they couldn't keep him as the lead, but left the heavy lifting to Jing, Fury Road is Max's film, but he's essentially just there to help Furiosa on her quest. Damon isn't meant to be the most important figure here, he's just reacting to the events, the problem is he does get treated as the most important figure.

On to the movie itself, relax it's fine. It's nothing special, after all the story is very basic (warrior learns the importance of fighting for a cause rather than for self gain) with no new twists, but there is something to be proud about regarding a film set in the past that avoids the "girls can't fight" subplot for the female lead, no one bats an eye that a woman is in a high ranking position, which is cool. At most, what I can recommend in watching this film for is the visuals, director Zhang Yimou delivers a colorful film with fun action scenes, some pretty cool looking beasts and well framed shots all throughout. I loved seeing all the different armors, paying attention to the details of all the action scenes, along with the choreography, this is certainly "junk food" cinema, but it's well done, making it worth at least one visit, especially on the big screen, trust me this is a film worth watching on the big screen purely for its visual spectacle.

I do think this could have been better with some alterations, of course I'm talking outside the race controversy. For starters, this is a short movie, which is fine because it means it's not bloated, but the problem there is that means some things aren't fully explained, like the film's monstrous villains, how the army knows certain key things about the creatures, why they only attack every sixty years, etc. I could follow along the story fine, but some minor details could've helped. Then there's also this subplot regarding another foreigner played by Willem Dafoe, it's not there for long, and it only exists to fully show how much Damon grows by the end, but the film could've worked better without it. So, if there's anything that holds the film back as it's own thing, it's that the film never runs at a proper length, meaning don't expect a reevaluation anytime soon for this, it's average with a problematic choice in casting. I just can't fully recommend The Great Wall, sorry, the casting controversy may not be as wrong as some people have said, but it's still an issue we need to talk about. I do think it's worth one theater viewing, purely on the basis of the visuals, but that's really it, if it weren't for how nice it looks I would say it's a rental at best. The action can be fun, but the story is so standard that it just never rises beyond decent, leaving the discussion of Matt Damon's lead role to be the dominating conversation worth having here, so at best, watch it on the big screen if you were at all curious about this one, if you were bothered by the casting, I doubt you'll be won over, but you will get to see something nice visually, so at least it's not a total loss.