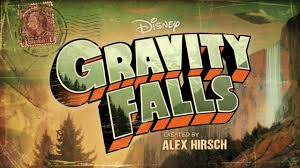 A year after its finale (yes, look it up) I find myself still saying farewell Gravity Falls, sure I don't think of it all the time, there's plenty else to watch, but it truly is the best show to come out of the Disney Channel in recent years, possibly in general. Here's something of a look back if you will in honor of the occasion. 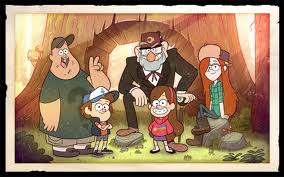 Man I really loved this show, I mean I REALLY, loved this show. I honestly, find myself impressed that a show on Disney Channel, a channel I despise in almost every way, managed to produce a show that hooked me in a way most other shows haven't in recent memory. I don't think an animated show for kids has ever grabbed my interest the way this did, at least, not in my adult years so far, the thought of that shocks me in so many ways, considering I take pride in my love for animation. Gravity Falls, was a show that ended up feeling like an event, more often than not, a feat I don't think a lot of shows have ever accomplished for me; I can only say thank you Alex Hirsch, this was one amazing Summer (that took four years to finish) and one amazing show. 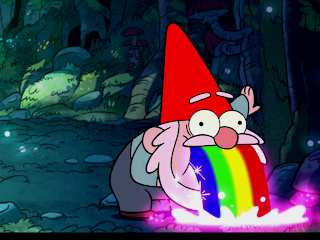 As someone who enjoys Cartoon Network's Regular Show, my first reaction to Gravity Falls, was that it looked incredibly similar to it,, well that and I assumed I wouldn't enjoy a Disney Channel cartoon, though this opinion would change in the course of the first episode I saw, which coincidentally was the first episode of the show, Tourist Trapped. I have a younger sister, she enjoys Disney Channel, way more than I ever did mind you, so my first exposure to this was through her, I laughed, hard I must add, within that half hour, something I never expected out of a "kids" show from Disney Channel. This culminated with the final scene from that episode, the now iconic ending for fans, wherein Grunkle Stan (essentially the heart of the show) goes behind the vending machine, that's where my interest was piqued, I didn't know if it was just a gag, or something bigger, but I hoped the latter would be the case, and over time, we found out the latter was true. This wasn't just a funny show, it was a show with a mystery that was intriguing even for me, what was going to happen? Where was this heading? Would the story be completed properly? These questions amazed me, largely because I was asking these questions about a show I would not have watched on my own, at least at first, but as said before, each episode became a "mini-event" for myself, I find it surprising that I ever thought it was a show I would never care for. 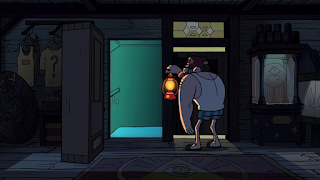 A full year after the show began, Grunkle Stan, finally give us more information about his secret room, (I won't shy away from spoilers, so stop now if you haven't seen this) the ending to the first season left us with a shocking revelation, it still didn't answer everything, in fact, it would be another two years before we got the answers to that secret room. The episode Not What He Seems finally revealed the shows biggest secret, that secret room was being used to rescue Stan's twin, Stanford (Ford) a reveal that still feels amazing, despite having been predicted by many of the show's dedicated fans; The twist and turns that it took, just to build to that impressive reveal is why I loved Gravity Falls, it was a show for kids, that was really aimed at everyone. As more was revealed, it started getting clearer that the ending was near, I honestly didn't want to believe it, after all why end the show with only two seasons? Three just felt more natural, but once the show's villain, Bill Cipher took control of the town it became obvious, thus would be a two season show, a fact that saddened me then, a fact that still saddens me as I re-watch the show, but I've grown to accept it was for the best, we were given mysteries, once the answers are there why prolong it? 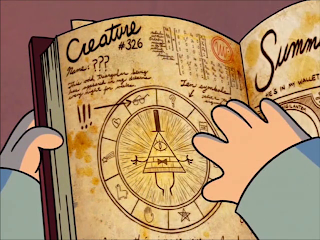 While it may be unfair to compare seasons, yes Gravity Falls had a good first season and a great second. Intentionally or not, the first season felt like the fun, continuity-free (but not absent of it) season that was there to introduce us to the world, while the second season was the continuity-driven season that had fun sprinkled in, essentially the "cliff-notes" season, followed by the "actual story" season. That's not to say the first season is bad, I had fun all throughout, but if you were to marathon the show you'll notice it's the second season that feels like a story is being told all throughout, the first is just not all that connected, beyond the origins of some references or characters in later episodes, season one isn't as strong, which is okay, too many shows fizzle out after their first season. It's good to see a show that saved the best for its latter half. 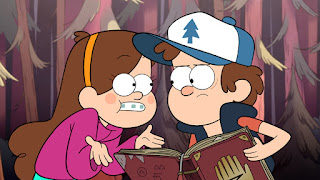 I bring this all up because I'd like to acknowledge that this show was not perfect, I loved it, but I can't truly love it without acknowledging it's not a flawless piece of work. I must admit how impressed I am that not a single episode in the forty produced are bad, even my least favorite episode, The Deep End, was not bad, it just felt useless and lacked a lot of hilarious moments. This may not sound like much of a feat but trust me, shows not having a single bad episode is very impressive considering how rare that is. All things considered, the closest the show comes to being lackluster is probably in the character of Pacifica Northwest, the rich daughter of the town's "founding" family (we find out her family's wealth is built on a lie), she's fine as a character, the problem is she never becomes as important as the show seems to set her out to be, add to that she's a character who never fully grows as every episode seems to reset her status as a spoil brat. Then there's the characters who never make full reappearances, ending up feeling like missed opportunities, where was the true founder of Gravity Falls after his initial appearance? Seems like we could've had at least one more episode on him to further reveal the past of the town. Even characters who made repeated appearances sometimes felt like their stories were never finished, what happened to the time traveler (Blendin Blandin)in the show's finale? Sure the answer is in one of the books, but a good show should have cleared that loose end. All these issues (as well as a few others that probably will be discussed at a later time) do prevent this from being perfect, but once it's all acknowledged the good tends to come out; Pacifica did get interesting at points, which makes her status as the weakest recurring character all the more frustrating, we liked the one-time characters enough to want more, Blendin's outcome mattered because he was fun to watch, we cared for all this. Gravity Falls is an imperfect masterpiece, one I continue to be proud of watching. 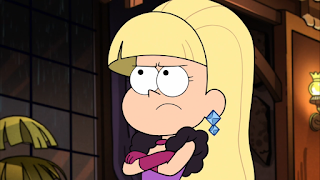 I originally considered acknowledging that Dipper's (the show's lead) voice was a weakness, after all it took a while to get fully adjusted to it, but after re-watching the show I just disagree. Jason Ritter manages to sound just right as a preteen boy on the cusp of puberty, plus his performance bounces off of his co-lead so well, Kristen Schaal as the always adorable Mabel. These two were such great characters, I loved watching a show where the siblings weren't always bickering with each other, I loved seeing the love and care being present, while also making both characters feel unique, despite their status as twins (why do most shows portray twins as just "hive-minded" siblings anyway?), simply put, we liked this show for its characters. The supporting cast were usually a ton of fun, including, but not limited to everyone's favorite man-child of the show, Soos, (voiced by series creator, Alex Hirsch) and Dipper's love interest Wendy (Linda Cardellini), adding a lot of the humor to lighten the mood of what was a pretty dark show at times. Of course the scene-stealer is Grunkle Stan, Dipper was the Brain of the show, Mabel was the soul, while Stan was the heart (funny enough, he's also voiced by the show's creator) without Stan a lot of the show would not have begun moving, without Stan we wouldn't have the emotional send-off the show builds to, or most of the themes and messages, he's a screw up trying to redeem himself, he grows, but he never fully changes, but that's okay as he ends up saving the world for being who he is. Without a doubt Grunkle Stan is the character we relate to the most, even as his role grow smaller once his brother showed up (voiced by J.K. Simmons of all people) he always provided the show's strongest moments, resulting in, as mentioned before, Stan saving the world, a sacrifice that ends up being at once a fist-pumping awesome moment, while also being one of the most emotional sequences the show crafted. 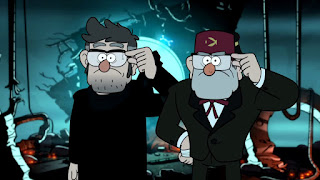 Of course the villains were always a joy to see as well, the monsters the show brought were always fun, from evil gnomes to an evil triangle, this show was creative. Strictly talking about the lead villains of each season, my assessment remains the same as my assessment on the seasons themselves, Gideon was a good villain for the first season, but Bill Cipher (who stole the show in his introduction in the first season) as the main bad guy for the second season is definitely an all time best for Disney, not just in television, but in the entire corporation's history, yeah I said it. Gideon (voiced by Thurop Van Orman) essentially starts as a fusion of Dipper and Grunkle Stan, a con artist child with his own book to guide him in the weird world of Gravity Falls, but as the season comes to a close we see how nasty and maniacal the little monster can be, turning what started as an "evil" version of the lead into a threatening and fun villain. Then we follow Gideon with Bill (voiced by the series creator as well) a demon (possibly devil when you think about it) who dominates the mind, essentially the Joker crossed with Batmite and the Illuminati. I absolutely love this villain, he's such a simple concept, but as we see more of what he can do, more of what he does for a laugh, we find ourselves both entertained and disturbed by a creature who takes genuine pleasure in creeping out the normal out of people. The animation was always pretty good, but anytime Bill was onscreen the animation was always delightful to witness. 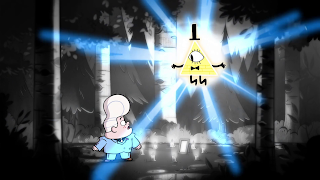 It's hard to say what this shows legacy will be, but as far as I'm concerned it is just an amazing addition to the "Mouse House", a strange comedy that was smarter than expected despite not needing to be. I can't imagine another kids show like this coming out anytime soon, looking back at it, I'm amazed this show got to tell the story it wanted to completely, not many shows are that lucky, especially shows like this one that had a lot to offer for older audiences. The characters were great, the story was great, the animation even achieved greatness at times, a feat that is amazing to achieve on TV. Gravity Falls may have ended, but I imagine I will look back at it repeatedly for years to come, thank you Alex Hirsch. 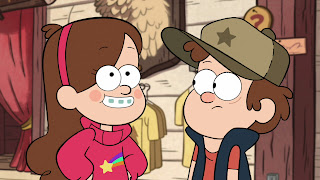 Did you enjoy this? Support me on Patreon for more.