THAT ONE SCENE-LET IT GO 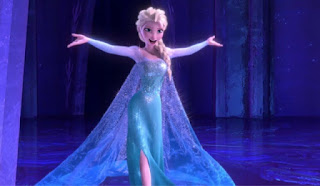 Well, I felt like resurrecting this old segment, THAT ONE SCENE. If you've forgotten this, or just never read one of these, That One Scene focuses on iconic, stand out scenes from movies, scenes I love above everything else from specific films. This time I decided to take a look at one of the more iconic scenes from recent animation history, "Let it Go" from Frozen.

I know it's become the cool thing online to hate on this film, but it honestly is really solid, even if a bit overrated in some circles, the kind of movie where one look at it and you know exactly why someone would feel so strong about it either way. To me, nothing else better captures the responses people have over this movie than this scene and song, you may hate or love this movie, but however you feel about "Let it Go" as a song tends to indicate on which side of the spectrum you're in. I've known people who dislike Pocahontas, but like "Colors of the Wind" for an example, with Frozen, anyone I meet, regardless of their thoughts on the various songs, it's how they feel about "Let it Go" that matters, case in point, I think it's a really good song, even if it's not my favorite, which also sums up my thoughts on the film as a whole.

So why does it all come down to "Let it Go"? What makes the song that effective? Along with the scene I must add. Well honestly, it feels like the perfect anthem for so many people, it's a call for many to just be themselves, plus it's good ya know? While many have attributed the song as the "coming out" song, an understandable take which we'll get into a bit, I do think it has been far broader than that for many, it is a song about someone finally being themselves after a life of having to pretend to be something "normal" a relatable subject to so many really. An attractive woman may view it as a call to stop expectations of attractive women keep her from her "geek only" interests, a boy may view it as the song that tells them to stop having to be bound to "manly" interests, and yes, a gay person can view it as an anthem to coming out, screw the people, you should be you, the coldness of others reactions to your acceptance of you be damned.

It's the last one a lot of people latch on to, which makes sense, in fact, it wouldn't surprise me if that's where most people who made "#giveElsaagirlfriend" trend got the idea to do so. "Let it Go" is beautiful on its own sure, but it's that extra depth that makes it stand out, this wasn't just a song that sounded nice, it was a song that spoke to many, "look at this Disney queen create wonders and beauty, she accepted who she was, despite those who may hate her and she's incredible for it" it's what we all strive for, we want to be ourselves, despite the hate we may recieve, no group out there can relate to this as much as the gay community right at this point in time, which is fine, they deserve something after what they still keep going through.

This is a beautifully animated scene, as well as a cute sounding tune, but it works precisely because of the depth, it's a song that feels much needed for so many. In my personal taste, I feel the reprise of "First Time in Forever" is a much stronger song, as it provides the struggle someone may have in confronting others as they've embraced who they are, but that experience isn't nearly as universal, embracing your knowledge isn't nearly as hard as embracing your status as a member of the LGBT community, regardless of what you may think.

There's really no scene that even comes close to the iconic status of this scene in modern animation, it's a scene where regardless of your opinion you fully know what it is and where it comes from. While Frozen is not my favorite Disney film, it's a scene like "Let it Go" that keeps it on the higher end of the fifty-plus films. It's a scene that speaks to many, a scene that feels right as an anthem for the LGBT community, a scene that defines the movie so well. This is absolutely perfect,  and the kind of song that has rightfully become well known. I hope you liked the return of this segment and I hope you let me know if you want more.

Email ThisBlogThis!Share to TwitterShare to FacebookShare to Pinterest
Labels: Disney, That One Scene