THE TRAGIC LEGACY OF SHREK

The legacy we leave behind is among the most important things we can do with our lives, good or bad, future generations will remember us by our actions and memories. Legacy for a piece of entertainment however, is in the hands of the audience, what a movie, show, novel, etcetera is remembered for depends on people to voice their opinions and thoughts, telling us the greatness or horridness of the work; whether it's a landmark film, an average film, or a joke for people to insult or laugh at, we as an audience give a film its legacy for future generations. Our legacy has become a bit harder to control, largely due to the internet, any mistake we make can be taken to an extreme. "Trolls" or as they should be called, ass-holes,  can pick apart anyone, even someone who really didn't do anything wrong; imagine how much easier it is to ruin a piece of entertainment in that regard, something that should be remembered as something major, can become the punchline of a stupid meme, much like Shrek. 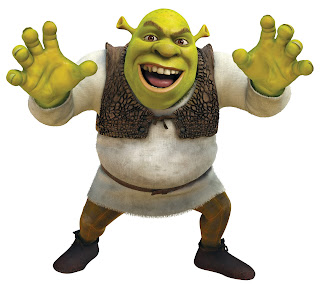 Shrek was a major animated film, released over a decade ago (14 years to be exact) it still is a fairly entertaining film to watch, what it did however, made it so much more than that. Kids today might find it a bit hard to believe, but back then if you weren't a Disney animated film you were guaranteed to fail, even if you succeeded you were not guaranteed to be remembered after that, Shrek changed that. In 2001, Shrek became a massive success, not just financially but critically as well, eventually becoming the winner of the first ever Best Animated Feature award at the Oscars, clearly leaving its mark in history. Many will agree that everything Shrek had accomplished that year was important in the world of animation, even if you didn't think it was great, or that it even deserved the award (I'll admit to preferring Monster's Inc.) Shrek's win definitely inspired more studios to take risks and challenge Disney in the animation field. Without Shrek, animation would most likely not be the same today, let alone coming from multiple studios, yet that is not the legacy we see today.

Like most successful films, Shrek wound up having sequels, merchandise tie-ins, and plenty other things. In general, most of the things produced for movies rarely harm the legacy, Jaws had horrible sequels and that's the classic we remember it being, Star Wars is milked to the point that even a dancing game was made, yet people still wait for the next movie as if nothing bad has been released so far. Well what of the sequels? Shrek 2 was well-beloved by most (I'm okay with it) in fact it ended up being one of the biggest animated films of all time, but the pop-culture references had hit an all-time high with it. I think what began Shrek's downward spiral, both as a character and a movie, was the pop-culture references that became more commonplace with the sequel, sure even the original had it, but it was nowhere near the amount that the sequel (and studio for that matter) would become known for. Pop-culture references aren't bad, but eventually when they're just being used too much, or in ways that make little sense beyond being a reference, they can kill the entertainment value, either quickly or slowly as it all gets dated.What Shrek 2 may have started, was completed by Shrek the Third, that's where Shrek's legacy as a punching bag for online memes truly began.

Shrek the Third is awful, really awful, the problems built up since the sequel (mainly the pop-culture gags) come in full force, it's so bad that its mark on the series may be whats created the new legacy for the character and the original film. Almost no passion went into this, it was just a big dollar sign for the studios, no one really liked it all that much and despite what Dreamworks has said, I wouldn't be surprised if the studio deciding to kill the franchise after its fourth installment(originally a fifth was in the works) was a result of the awfulness of this one. Shrek the Third was an abomination so bad that the fourth film, Shrek Forever After, had the smallest domestic gross in the series (just to be clear I'm not counting the spin-off here) despite it being the best of the sequels, yes, Shrek Forever After was actually good, dropping much of the weaknesses that had developed and adding heart to the film made it the best sequel, but by that point we had been burned so bad that most people chose not to watch it, or criticize it likely using leftover anger from Shrek the Third. Most bad things fade away after years go by, slowly being forgotten, which results in the good shining through, but due to the changing world, largely because of the internet, I'd say most people (kids growing up), decided to take the ironic path. Shrek the Third was so bad that the stench was left on the franchise as a whole, the large amount of tie-in merchandise that the first movie mocked Disney for, did not help. Kids growing up who loved the series probably realized how bad everyone thought the third installment was, add to that how much everyone decided to lump the franchise as a whole when badmouthing that movie resulted in many deciding to ironically love it, love it because it was stupid, or bad or whatever, despite the importance of the first film, the legacy of Shrek is that he's the face of a mass marketed mess that is as ugly as its lead. I hope a decade from now Shrek reclaims the legacy it deserved, not the one Shrek the Third or the merchandise left it with.

Today, when people think Shrek, they think not of the movie, not of the importance, but a joke, he is love, he is life(not linking to that), he fits alongside trash like Bee Movie, Johnny Test, and some crap from the Disney Channel. People show some respect, sure he might've gotten rotten, but that first movie is still great, RoboCop, Jaws, Jurassic Park, Star Wars, even The Matrix are all remembered as masterpieces even though they each have trash (some worse than Shrek the Third) attached to them. Let the legacy of Shrek be a great one and not that of  a joke, I love a good meme, but that kind of legacy is just tragic and sad. Shrek is a film that deserves a legacy worth honoring.