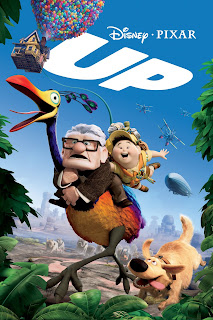 The picture and title alone should make it very clear what today's scene is right? I mean, most people have seen this film by this point, and even if you haven't you know what scene people went nuts about. I personally find myself liking Up, but it's really a mid-tier Pixar film for me, yeah the scene I'm talking about is one of the studio's finest work, but everything else feels pretty standard, good stuff to be sure, but aside from THE scene everyone goes nuts over, this is average Pixar, which is still great compared to most honestly. I want to say one thing before I present the scene, it's very emotional, if this is your first time witnessing it you will most likely cry, I know you might tell me that you're tough, but trust me you aren't prepared, even if you're strong enough to fight the tears you will lose in the end. In any case, here's my (likely yours as well) favorite scene from Disney/Pixar's Up, Married Life.


I'm assuming you just came back from crying to finish reading this, but boy isn't this beautiful. I often just see this scene thinking Pixar could've won an Oscar for it, then remember that they did, Up won an Oscar for Best Original Score, I can guarantee you that this scene alone was all the Academy needed to convince them to give the award. While most films aimed for family audiences would try to avoid the negatives of life, Pixar brilliantly showed us the beauty and tragedy of a lifetime, this doesn't hide the unfairness of life, but it also presents why we keep going despite those issues. I still feel amazed just by how much we learn about an entire lifetime in such a short timespan, we know how much Carl loved his wife, and vice versa, we learn why their dreams were often shattered, yet we see how they managed to pull through when life couldn't, we see one of the most beautiful love stories ever captured in animation.

I often wonder how Pixar can get away with scenes like these (spoilers),from Mike coming to the cruel conclusion that his dream can never be real, despite the amount of heart and studying he pours in, to Bing Bong's sacrifice, even the acceptance of death coming from toys, Pixar really nails it whenever they're willing to do mature scenes. Married Life is the most mature sequence in Pixar history, while I feel the movie as a whole is not as mature as either Ratatouille, or Inside Out, I do think this scene in particular stands above so much that has ever been done by this studio, by animation and film in general. I knew this scene was amazing the first time I saw it when midway through it decides to showcase why they never had a child, powerful stuff, something most studios would avoid, even more so because it's a tragedy that comes before multiple tragedies. I'm not gonna say that most films avoid tragic/sad moments, but lets be honest, tragic scenes are rarely a part of multiple tragedies; what I mean is that in this one scene alone we see joy and tragedy coming and going throughout the entirety, despite most films saving the tragic moment until the end of a flashback, or origin sequence, here we get tragic moments in the middle of the happy moments, which makes it feel more real. Tragic moments in our lives are constant, we don't have happy lives that quickly become tragic ones after one incident, our lives are in a rotation between these moments, which is perfectly captured here.

The people of Pixar are masters of animation, the level of detail going into their movies is always impressive, whether it's the details of the landscape or just the reactions, the animation is always amazing, here we witness some of their best facial work. We know how these two feel just by seeing their faces, the emotions come through, which is why it's so effective, their love is told to us in such a simple and complex way. People often talk about the silence of the first thirty minutes in WALL-E, but the amount of emotion here is even more present within these few minutes (and that's coming from someone who prefers WALL-E overall) which says a lot given that most believable romances require almost an entire film's length to capture the connection found here. The whole movie could've fallen apart if the scene here was not as well animated as it is, the love needed to be felt along with the passion to make the journey not only more believable, but reasonable for Carl, the emotion would just not have been present.

Married Life is Up and Pixar at their finest, the scene is just perfect and remains to be the greatest reason why animation needs to start being taken as seriously as live-action films, if we can care more about the lives of two cartoon characters than we can about most relationships in romance films, than why are we still pretending animation is the lesser of live-action when it should be the equal. I feel like watching this scene again, join me so we can continue feeling the beauty of it as our lives continue to find meaning and adventure, see you next time on That One Scene.