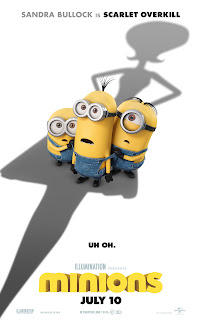 Synopsis-Minions, the evil yellow helpers to some of history's most despicable men find themselves without a master for decades, aimless and adrift, Kevin, along with Stuart and Bob decides to find a new master in the form of history's baddest woman, Scarlett Overkill.
I don't really have strong feelings for this one, I didn't hate it, but I also don't love Minions, the spin-off of the popular Despicable Me. As far as prequels go, this is on the better side, if only because so many aren't good, as well as the foreshadowing to the prior films is not forced like so many others mistakenly do, things happen coincidentally setting in motion the original film, thats it. As a spin-off this feels a bit weird, largely because I've gotten use to other animated spin-offs feeling vastly different (Puss In Boots was an action/adventure, Penguins Of Madagascar was a spy feature as was Cars 2) whereas this feels right at home with the prior films to the point that I wondered why not just call it Part Zero or something like that. I think this film's quality is largely due to its status as both a prequel and spin-off, it really does get mixed in deciding whether it just wants to tell a story about our yellow friends or a story about how they come to be involved in the shenanigans we remember them being a part of.

Once again our Minions are played by Pierre Coffin(who also directs) providing the voices, phrases and sounds we feel in love with way back in 2010, this time we're meant to feel a bit more for our little Minions, but honestly we still end up laughing. Sandra Bullock fills in the role of their despicable leader, Scarlett Overkill, while husband Herb, played by a groovy Jon Hamm, fills in the role of the inventor, both are great to a point that a movie about them might have been a better film. Speaking of better films, Michael Keaton and Allison Janney also show up as a couple of villains, though in smaller sequences with a family, providing a lot of comedy in their scenes that would also make for a better film if focused on them. A few others show up along the way but the most notable would be Geoffrey Rush as the narrator, he's fun as far as narration goes, but I'm amazed I like many others didn't pick it up after the first trailer.

As mentioned earlier this film is largely for the younger crowd, slapstick makes up most of the humor on display which eventually does get tiring. If there's one thing worth admiring in the comedy it's the pop culture references, whether it's the great soundtrack or the background humor, the movie keeps it in the 60's for the most part, making this a film that can't get dated because it is dated already, but in a way that works for older audiences enough to keep them laughing after the hundredth Minion hits himself (itself?) in the head.

I really do mean it when I say this film features two couples who could've starred in better films had they thought of it. The Overkills are sweet enough couple that it could've been easy to do a film centered on them just being evil, sort of like a romance film starring Gomez and Morticia Addams, though less horror themed and more spy themed. The Nelsons could've easily been the stars of a Vacation style movie wherein our leads go to a convention while robbing along the way, wouldn't that have been a better film. The biggest disappointment though is how even the Minions themselves could've starred in a better film, had they just made this History Of The World: Part One but for kids with the Minions I would've loved this a lot more. Any of the films I mentioned could've easily been better, especially since we wouldn't have to be asked to care about a trio of leads who are almost identical enough that it's hard to figure out what makes them different personality wise.

I just don't have much to feel for this movie, it isn't bad, but there's just not enough there to highly recommend it. Minions is a serviceable prequel, a not-so great spin-off, a film that aims young and a decent enough feature, watch it only if you loved the prior films.