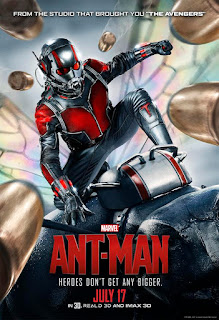 Synopsis-Ant-Man, or Scott Lang as most would know him as, is recruited to a heist that will save the world from a weaponized creation.

It feels like a decade ago a character like Ant-Man would never have received his own film, yet here we are now, Ant-Man is a major film out in theaters now. Most people remember a year ago when Marvel's big failure was foreseen, Ant-Man lost its director (Edgar Wright)which made it seemed like everything would be rushed, thus a bad film would be made; well, you best stop writing those failure pieces this is a winner, a great addition to the Marvel Cinematic Universe.

Marvel has no shortage of leading men , this time, Paul Rudd takes center stage as Scott Lang/Ant-Man; Rudd is great in the role, feeling less like a man bred for greatness and more like an average joe who happens to be a superhero, a perfect fit for the character of Scott. Comic fans know that Scott was Ant-Man number 2, the original is Hank Pym, portrayed here by Michael Douglas, an excellent addition to the MCU despite being vastly different from his comic counterpart, he's so good I actually found myself loving this version over every other version of Hank to date. Another character that's vastly different from their comics counterpart is Hope van Dyne, portrayed by Evangeline Lily, she's a great character, though she unfortunately ends up being a love interest to Scott despite little build up to that, still she's a great addition to the cast even if she doesn't get into the right kind of action much. Our antagonist this time around is Corey Stoll as Yellow Jacket, a sort of Lex Luthor-esque bad guy who is fun, but has a fate that ruins any potential for him to cause more havoc, Marvel I love you, but the movies really need to start having these villains be more reoccurring. Abby Ryder Fortson plays Scott's daughter Cassie, Judy Greer plays mother/ex Maggie, while Bobby Cannavale plays her boyfriend Paxton, they all work fine, but Cassie is without a doubt the strong, beating heart of the film. The biggest surprise for the cast (aside from an excellent Avenger cameo I won't spoil) is Michael Peña as the very humorous sidekick Luis, he's a funny addition to the MCU, as well as one that will attract the Hispanic community, trust me.

After multiple films that kept creating an end of the world scenario, Ant-Man feels like a welcomed addition to the MCU, feeling more personal than most Marvel films, this film's decision to go for smaller story beats (pun intended) works. I was amazed by how invested I was in a film that doesn't really have any real action scenes till over an hour into the film, the characters are really that fun to watch. Even as we enter the climax (which is very reminiscent of The Incredibles) the film feels less interested in the action and more interested of the wonder of the effects, it's spectacular, one of the best climax sequences in the whole MCU. Without giving much away, Scott's eventual solution to Yellow Jacket is bound to be one of the most impressive looking things you'll see all year, a psychedelic tease to an area Marvel has yet to delve into.

The MCU is great in distinguishing its movies from each other, this one plays less like a superhero movie, and more like a classic family film from your childhood. This is a film about the wonder of being able to shrink and controlling insects, while learning to be a better father, resulting in a film that is clearly a superhero film, but feels fresh enough to hook those that aren't huge fans of the genre. I highly recommend you watch this film as soon as possible, it's not only one of the better additions to the Marvel Cinematic Universe, it's even better then their earlier film this year.