THE DEATH OF SUPERMAN LIVES-REVIEW 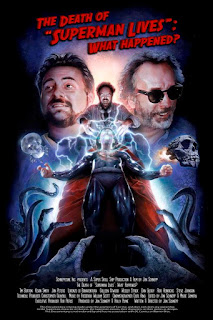 Synopsis- Jon Schnepp interviews multiple filmmakers involved with the infamously canceled Superman Lives, taking you into the world of what might have been the most insane comic adaptation.
I think it's fun to learn about the history of almost any film, but the history of a film that was canned? That is always interesting. The Death of "Superman Lives":What Happened? Is perhaps more for the comic geek than it is for the average viewer, but considering how insane it is and how well known Superman is, I'd say this won't be too hard to follow.

As a supporter of its Kickstarter I feel I may come off as a bit biased, but I promise you all that my opinion is no different from what it would have been if I hadn't supported this documentary. One thing that I will admit makes me feel a little special for supporting this is one simple fact, MY NAME IS IN THE CREDITS!!! Sure it's just a Kickstarter supporter credit, but who cares, I feel great, though my opinion is still not biased I stress.

Jon Schnepp managed to get a lot of people for interviews to help broaden the picture, we get a clear idea of the kinds of things we would have seen which made me more curious than ever about what could have been. The biggest catch for an interview here is Tim Burton, the man may be strange but listening to him describe his ideas for Superman is just too fun and interesting. Jon Peters, the producer of the cancelled film also brings his own brand of weird to the film, but the passion is heard in him, almost enough to wonder if Kevin Smith's description of him was too cruel. Writers Kevin Smith, Wesley Strick and Dan Gilroy are brought in, giving somewhat of a structure to this doc,  we're introduced to each in a way that showcases (to some degree) when they were brought in to the film, they provide enough information to help but I'd be lying if I said they were interesting, the interviews involved with the various designers, artists, and pretty much everyone else feel not only more insightful, but exciting to witness; Kevin mentions a lot of what he's brought up before, Wesley simply doesn't add much, while Dan seems to mostly be there to let the audience know when the film was on its final days. All that being said, my biggest disappointment for the interviews is the lack of Nicolas Cage, they use archive footage, but I'd prefer an actual interview with the man, I guess they couldn't get him, but it does feel like it's missing, the doc would be that much more interesting if it had the leading man who seems to be a major reason why Schnepp was interested in doing the film in the first place.

Overall the doc flows smoothly, providing recreation scenes, as well as artwork of the film that makes the film look all the more intriguing despite being a possible bad film. I'll admit to liking the structure of the documentary, but also a bit disappointed by how little we get to know the structure of Superman Lives, I know the vision meant for it, but the story structure seems a bit too blurry, was the story really that much of a mess? I'm not sure, I hope it was something that was good visually and story wise. I still think the documentary will hold your interest enough to make the flaws less evident, but I don't know if most viewers will walk away not caring about the story the writers had in mind.

The Death of "Superman Lives":What Happened? Is a fun documentary to watch, the history of a canceled film is simply too much fun to learn about. I recommend this mainly to comic book geeks and possibly film geeks, but everyone might get something nice out of it, especially considering today's fixation on superhero films. Give it a watch, despite the shortcomings this is a good documentary.