THAT ONE SCENE=TIMES ARE A CHANGIN' 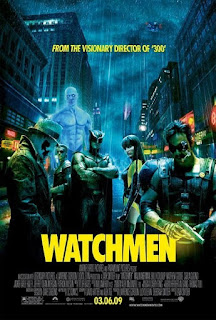 Today's scene comes from a movie I'm fairly mixed towards, on the one hand the visuals and character of Rorschach are amazing, but on the other the story is kind of a mess on screen and most of the actors are decent but not anything special in their roles. I'm talking of course about Watchmen, the film adaptation of the great comic of the same name released in 2009. I don't hate this movie, but so much of it just doesn't live up to the comic, still as far as Alan Moore adaptations go I guess this might be the best of the bunch, which must suck for the man. I love a good visual with a good soundtrack, the two can perfectly create something of beauty, which you'll find in today's scene, the scene being that of the opening credits for this film, enjoy.


I often dislike Zack Snyder's work, but I just can't deny, this is easily one of the most beautiful things I've ever seen done in a movie. I love the motion, the way the music plays off of the visuals, everything is just perfect, if the movie existed just to present this scene then it was well worth it. I absolutely gush over this every time I watch it, I just think if Zack could make more things like this I wouldn't mind him ruining Superman as he did with Man of Steel, I really wouldn't.

The way the history of their world (which relates to our history in many ways) is told through visuals is simply amazing, with five minutes I get a full understanding of how it all works without needing to ask a lot later, visual story telling at its finest. I also love how much we learn about the heroes themselves through this, we realize Rorschach is messed up in a number of ways, Dr. Manhattan is all powerful as well as a very important figure, while almost every one of the original group of heroes seems to have met some tragic fate, whether it's being sent to an asylum or just being murdered for their sexuality. Honestly everything here says a lot more for  the characters than the actual movie does.

It's rare when I fall in love with a scene and not the film its featured in, but that's the case here, Watchmen just does not compare to this scene. If there's one reason why I'll be thankful for Zack Snyder existing, it's this, there simply is no opening credit sequence like this, it's both unique and amazing to witness. I don't really recommend watching anything after this scene, but if you plan to I'd say it's decent enough to not feel too mad about it. This scene is too beautiful not to include on this segment, give it another watch if you haven't already.

Email ThisBlogThis!Share to TwitterShare to FacebookShare to Pinterest
Labels: DC, movie, That One Scene