IS BILL THE DEVIL? A FAN THEORY

Hi there, I'd like to take this time to announce my plans for October, since it is a rather spooky month I want to make more posts for that sort of stuff. The kinds of posts I'll be doing are original stories and theories on shows that are spooky in there own way. Consider today's post a tease to that kind of thing, it's a theory of my own, at least I thought of it, but I'm sure others may have reached a similar conclusion. Is Bill Cipher the Devil in Gravity Falls? 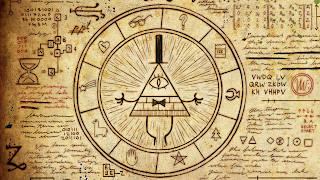 Bill is a mysterious character tormenting the heroes of Gravity Falls, we know so little despite so much having been revealed, he is all powerful, but in his most recent appearance (The Last Mabelcorn as of this writing) the only thing that came to my mind was how much I think about the similarities between Satan and Bill. I'm not religious, in fact I am agnostic, but I acknowledge some stories create parallels, intentionally or not, of religious aspects, I'm fairly certain Bill is a parallel to the Devil, whether that is intentional or not I'll never know. Before I get into my points I would like to mention that my intent here isn't to reveal some kind of truth, or to say the creator has some satanic message, I'm just noticing interesting parallels that may or may not have been intentional. I urge you, the reader to argue with my opinion if you feel the need to do so, or add to my thoughts if you've had similar thoughts before, in any case let's start this theory.

In Bill's first official appearance, Dreamscaperers, we see that he can go inside people's minds, this would later be showcased to be far more dangerous in later episodes where he outright possesses other characters. We know that in most interpretations, Satan can possess people to carry out his evil, it's what keeps his plans in motion, Bill Cipher is capable of that, but then again, so are many demons and ghosts in fiction. I would say the big difference between Bill and most demons is that so far, whenever he possesses someone he has not only an agenda, but he tricks whoever he possesses into believing it's their choice. In Sock Opera and The Last Mabelcorn, we see Bill trick two characters into allowing his possession, one by offering a simple solution, only to then have it backfire on the person, while the other has a longterm of peace to his deal before it blew up on his face. In many stories, Satan makes deals with people that often back fire the people begging for it, in fact Satan often seems to posses others through his deals, it's just what is commonly done, Bill is very much like that, and his punishment towards others go beyond that.

While in Grunkle Stan's mind, Bill was carrying out a deal made with Gideon, who was up to that point the main villain of the series, what's interesting here is that what Bill wanted out of Gideon is never clear, what is clear though is that Bill knows plenty. Bill Cipher claims to know a lot of things and the way he speaks to everyone as if he knows their past, present and future makes it clear that he is true in his words, Bill seems to be able to see anything through images of himself (which appear in every episode) which is a trait known to few, the Devil being one creature who would carry that ability in many tales. Bill's knowledge can go as far as what's within the mind, as made clear in his first appearance, wherein he knew how to torture both Mabel and Soos through their own personal fears. To me, that kind of knowledge has often been used with the God-like characters, which Satan is God-like, but in a malevolent way. Bill can be, and often is described as a malevolent God-like demon, this really is where the comparisons grow stronger, but not as strong as his "origin" revealed in The Last Mabelcorn.

Up to this point, many of Bill's traits could be considered as common to many strong demons in fiction, I believe the combination of traits really set up a Satanic comparison, but it's in the details we learn that I think it begins to form as something worth considering. During his last appearance we learn that Bill has been doing this for centuries, "choosing" brilliant minds to "enlighten", in reality he just takes advantage of these people for his own gain, which seems to be apocalyptic. Bill's plans seem to pin the endgame as whenever a portal to his world is unleashed, a world that is filled with demons who seem to follow his lead. Sound Familiar? I hope so. Bill's world seems poised to destroy the people and the world in Gravity Falls in the most unimaginable ways possible. He's a dealmaker who loves to punish people, mess with peoples minds while possessing them, was at one point worshipped until his true nature was shown to be malicious, and promised knowledge to those who have been tricked by him, Bill is Satan in Gravity Falls, maybe not the most literal take of the being, but then again would a true master of deception reveal his true form.

I must repeat, everything stated here is just my opinion, I don't at any point believe Alex Hirsch intentionally added a Devil character to the show, but when I think of these things, I see an odd parallel that seems to have been made unintentionally. Bill functions as the biggest evil in the show, as well as a near unstoppable force what we will learn may add or change that, but in my eyes, I view Bill as yet another interpretation of Satan from Disney.

Bonus Theory-Season 2 will end with Bill succeeding, leaving season 3 to deal with the fall out of his success.