Here's your first glimpse at what actually looks like a good way to adapt a game to a movie.

Well the day we get a good videogame movie may be soon, will it be this one? I'm not sure but it seems like a fair bet honestly, because it at least looks like a good way to adapt a game with little story as a movie.

I am not the biggest fan of Angry Birds, in fact the interest fizzled for me fairly quickly, but wouldn't you know it, the cast seem enthusiastic to be a part of this, while the actual footage looks nice, while providing a few cute jokes, so this may be good. I'm not sure I'm convinced this will be great, but it does seem poised to change the market of videogame movies. I really believe this will be a big enough hit to push for more adaptations, finally bringing us the elusive great videogame film, not sure why, but it just seems like it's the kind of movie that will be a hit regardless of quality.

Characters, I believe is what this trailer manages to succeed for me, I walk away from it knowing who our leads are, what makes them different from each other, as well as how they'll bond. My big problem with most videogame adaptations is that they often seem so focused to recreate aspects from the game regardless of context, or whether it makes sense or not, here the filmmakers seem to find the right tone by just focusing on the characters, aside from minor things like the Bomb bird exploding, this is an adaptation focused on building a world around the characters and what we know about them, rather than one that sticks to what the game has to restrain itself from being more than what it could be.

I feel confident enough about this one to say that after this movie we'll see a rise in videogame adaptations. While I'm not convinced this will be a great movie, the filmmakers are confident enough in it being a blockbuster, a rarity for this type of movie. Watch it next summer if you're interested. 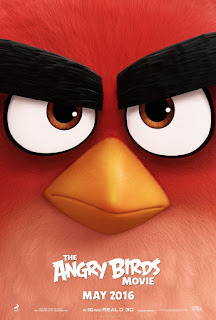