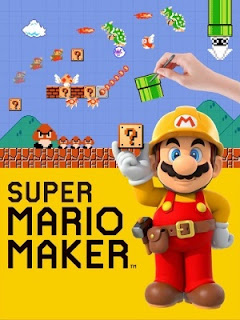 Premise-Create and share the most insane Mario levels created by you!

This is what beauty looks like, this game has had me hooked like no game in recent memory and I can't even feel the least bit guilty. Mario celebrates his 30th Anniversary doing the one thing we never expected, sharing memories through our imagination. We've been given the tools to create levels to our liking and the results have been insane. I think we've got a contender for game of the year with this one, because no other game will give you joy like one created by you.

This game perfectly set itself as a game for everyone, from the beginning we are given a limited assortment of tools to build sample levels and it works, the learning curve is perfect for the kids who will have the most time to play this. At first Nintendo announced the game would require you to play the game nine days straight before letting you go wild with everything, thankfully there is a patch so that you can get it all much faster so long as you keep working with the new tools, it's a fun way to truly understand all you are getting before moving on.

I love the fact that we get four visual styles to choose from,Super Mario Bros.,Super Mario Bros. 3, Super Mario World and New Super Mario Bros. U, the beauty in seeing the various style is part of the joy. I'll admit I want an update that adds a visual/gameplay style reminiscent of the American sequel, but so far whats here as been enough for me to spend hours in.

Understanding the timing and physics of things is crucial, which the game does a good job of presenting you all this, if a jump you make in a level has been missing its mark, no worries add a ParaKoopa or platform so you can land where you need to. Think your level can be done quickly and want to add that urgency to people, cut the time down by a lot. I can't stress enough how creative this game makes me in figuring levels out, it's genius. I know this isn't the first level creator out there, but I can't think of the last time a game of this kind felt this big and fresh for being just that.

As of this writing I'm still exploring the levels brought to me by you, the fans, I'm not sure when I'll lose all interest, but trust me, it isn't soon. Go out, buy this masterpiece and waste no time to create, it's worth it.