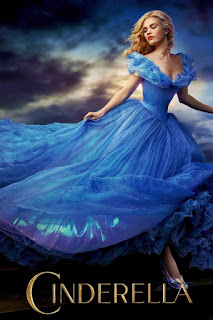 Synopsis- Ella is forced to work for her step-mother and step-sisters after her father passes away, but with her kindness and courage she may find a way to a better life.

Disney has made multiple attempts to recreate their animated magic on the big screen, their most recent being based on their most popular princess (pre-2013) Cinderella. I want to let it be known right off the bat, this is the best attempt they've made to date on adapting one of their animated classics as a live-action film, yet it's also nothing too noteworthy. Cinderella is a beautiful movie, with great performances all throughout, but the performances never match up to the animated counterparts and the wonder is lessened as the film moves along in mostly familiar beats.

As far as the look of it goes, I can't deny that the sets and costume are amazing, the kind of work worthy of an award, but the weak aspect of it all comes from the CG. I think the mice in this version work to an extent as CG creations, but beyond that, a lot of the creatures just look odd, especially one in particular upon Ella's meeting with the Prince in the forest, it's not horribly done, but it feels odd and out of place. I understand with the tools available it was an inevitable choice, but the movie's look does suffer a bit when suddenly a realistic, yet obviously fake creature rolls by.

The new substances added to this film mainly involve explanations to common questions asked, which at first sound good, but as the movie continues to stop to create these explanations I end up feeling a bit bored. I understand some people want to know why Ella doesn't leave her home, why Lady Tremaine doesn't notice her dancing with the Prince, or why Lady Tremaine is so mean, but to me the answers just take from the fairytale aspect. I'll admit some things added work well, like Cinderella actually being a cruel nickname, as well as the Step-Mother acknowledging her daughters to be idiots amongst other things, but the unnecessary was too much, the details just outweigh what works so well here.

The biggest reason why this film ends up being good is the performances. Lily James is great as Ella, a genuinely kind figure reminiscent of the animated version, but the heavy lifting is done by the film's villain. Lady Tremaine is one of the cruelest figures in Disney history, which Cate Blanchett thankfully manages to live up to that evil, for the most part, I would still argue that the animated one is better, but this version is cruel in a way that brings her close. If this aspect hadn't worked the film may have fallen apart, sure the visuals are beautiful, in fact it's some of the best from Kenneth Branagh's work as a director; but the acting is what holds the film enough to succeed.

Perhaps I sound too negative, but I mean it when I say this is one beautiful film, it may not be as charming as the animated classic, but it's worth a watch. This film's unfortunate weakness will always be that a better one from the same studio exists, had it not I do believe the judgement I pass here would be much more positive. Cinderella won't convince you that Disney has finally made an amazing live-action remake of their classics, but it will convince you that they may be heading towards making entertaining ones.