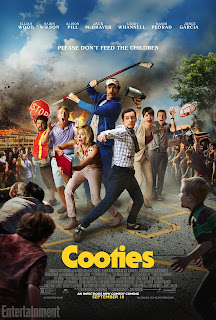 Synopsis-Elementary school teachers fight for their lives when a virus turns all children into zombies.
I'm not the biggest fan of zombies, I know I'm a loser, but they've always come off as some of the most boring monsters in entertainment, that is unless the zombies are the subjects of a comedy, in which case my interest goes up. Cooties isn't the first comedy with zombies, nor is it the funniest, but it works for most of its run-time. I feel like the zombie craze is slowly killing my interest for comedic zombie movies, but so long as they're funny I won't mind seeing more, I'd just prefer to see more comedies use other monsters for their humor.

This movie is funny for the most part, but a lot of the humor never rises beyond chuckles, of course some of the jokes fail to manage that, but it also never goes awful. Every time I groaned, or just rolled my eyes another joke would come that would make me laugh a little, not exactly the best thing a comedy can do, but it makes it worthwhile. The movie finds its center in humor entirely in the kids, sure not all jokes are about kids being evil creatures, but the bulk of it relies on you to laugh at that, if you think kids eating teachers is a funny visual, than you're the audience here. Aside from the humor I found myself a bit surprised that the films message also works given the situation, Elijah Wood as Clint is an adult who struggles to find success and the kids represent a parallel to his struggles, it's a simple metaphor,but I won't deny the emotion there was a nice touch.

Cooties biggest weakness might be that it expects the audience to suspend their disbelief so often, sure the virus only affecting kids is easy to understand, but the fact that the kids seem constantly aware of just what areas can cause the most issues to our heroes feels a bit forced. At one point a kid destroys all of the cellphones on campus without reason, it happens and doesn't make sense beyond making a reason why the teachers can't call someone for help.

Right before the movie ends we get some clever fun, but as that wraps up, so does the movie, despite there being a sense of a real ending missing. I'm not sure if there's plans to make a sequel or if the ending was a reference to The Walking Dead, but it doesn't work, it left me hanging, plus the joke we end with is just not funny. I'll admit the final twists are pretty good and make this movie feel more unexpected, but through that it all feels incomplete.

If it sounds like I hate this movie, you'd be wrong, it is a funny and enjoyable movie, but it never reaches it's full potential. Cooties offered me some nice breaks from what I would expect from a movie like this, but in doing so it also left some bits that don't work. I find silly and over the top bloody images to be funny every now and then, if you do too, you'll walk away from this having a good time. Recommended but not enthusiastically.