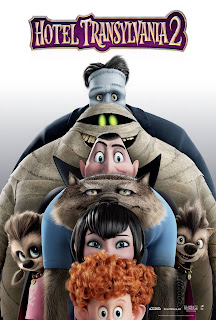 Synopsis-Dracula is back, this time, he's out to help his half-human grandson become a true vampire;shenanigans ensue while Drac's daughter is seeing the human world.
I liked the first film, it wasn't great, but it was a fun film that was more about the characters, Hotel Transylvania 2 continues that which is good, but it does end up feeling weaker as a result. The strongest thing about this movie and it's predecessor is still the animation, sure the voice work is fun, and the jokes are pretty funny all throughout, but the real reason why my attention stays is the movement and character designs on display, director Genndy Tartakovsky just knows this stuff too well. Unfortunately, this film does end up failing towards the end, it's not enough to make me dislike the film, but it is something that ruins the message, while also feeling like Adam Sandler definitely left his mark here.

On a positive note, the laughs are just as consistent here as they were the first time, Sandler and crew may not have the best comedies under their belts, but when given good material they can shine. If there's one drawback for the cast, it's Mel Brooks, sure his voice compliments Darcula's father well, but he comes in very late to the movie with little to work with, he may be a comedic legend, but you wouldn't know it based on this movie. Other than Brooks, the humor is done well with everyone, my particular favorite being Nick Offerman in the role of Johnny's father, his few lines are some of the most hilarious, largely because it's the perfect reactions to his wife's well-meaning, yet racist responses to almost everything.

Much like the original, the bulk of Hotel Transylvania 2's themes and message revolve around racism, it's not subtle despite trying to be, but I think it works. While I don't think shoving any message to kids faces is automatically a good thing, I do think it's important to at least try to teach them the rights and wrongs of the world. This movie provides some nice points about equality, much like the first, but unlike that one, this movie ends up failing to follow through, the message is there, but it's undone by a last minute twist that just felt forced in.

Another thing that's a bit weaker this time is the plot, it's very episodic, which to be fair is similar to the first movie, but the similarities end with the structure. In the first movie the story flowed naturally, while it was all very episodic, the story was clear and felt like a movie, this time the story feels very loosely connected, sure the idea of a story is there, but most of the time it feels like three 30-minute episodes strung together. At first we get a rushed episode detailing the marriage and early marriage life between Mavis and Johnny, also showing the birth and early years of Dennis, then it becomes a movie about Dracula trying to turn Dennis into a true vampire, and finally we get a birthday with special guest Mel Brooks, it feels that episodic, it'd be fine, but the story never really flows through it all smoothly. Despite some references and build up to plot points, the film just doesn't structure it all as right as it should.

I feel like I sound a bit negative here, and that's mainly because there are a lot of things that don't feel right, however I still think the areas this movie succeeds in (the humor, characters and the animation) are more than enough for me to feel positive enough about this one to recommend this movie. Hotel Transylvania 2 is not the film by Genndy that animation buffs are waiting for, nor is it as good as the original, but it's a fun re-visit to this world for fans. I recommend this, but only to fans of the original, everyone else might prefer a different place to stay in for the evening.