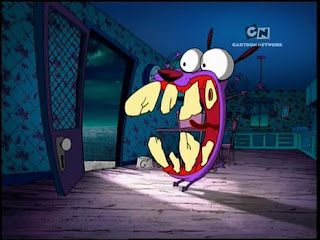 There's a lot of strange things that happen in the middle of Nowhere, a lot, most of which require Courage to save his two owners from. In one end, we have Eustace, a cruel farmer who takes pleasure from practically abusing Courage, on the other side we have Muriel, a kind elderly lady who often takes care of Courage, but what if what we see wasn't the whole truth? After all what kind of people attract the kinds of creatures that we see here? Maybe, just maybe, Courage true enemy is his owners, after all, Courage is the one who is most horrified by all these things, Muriel and Eustace might just be in "danger" because they enjoy seeing Courage in peril.

I want to make this very clear, this is a fun fan theory I thought of, I don't consider it truth, nor do I think it's a true possibility, however I do feel like it's an interesting thought.

Throughout Courage The Cowardly Dog, I always found it odd that an elderly couple would attract so much evil, while yes it could be summed up to it's fiction, things need to happen, it still seems unlikely that these two could get involved with a lot without even trying to, unless they wanted these things to happen. Eustace is very malicious to Courage, that much is obvious, but what if Muriel was as well, just hiding it behind a smile, it'd make some sense especially with how "unaware" she is of things going on around her. Muriel may be a kind figure to Courage, who has helped solve things on more than one occasion, but that could all be an act to keep things going.

There are a lot of weird people out there, people who take pleasure from pain, scenarios where they are kidnapped, and whatever else you'd believe to be unlikely. People enjoy getting thrills and it's my thought that perhaps Muriel enjoys being in dangerous situations, being thrilled by her dog going through so much to rescue her, even if it means her dog is getting hurt along the way. Eustace may be in on this, considering he enjoys seeing Courage in pain, but then again he is an idiot, so maybe his joy only goes as far as we see.

In this scenario, where Muriel is intentionally causing trouble, we get to realize how sad Courage must truly be, though Eustace is still very open in how cruel he is, Muriel isn't, meaning the one person Courage could trust, is the one hurting him the most. If this is the case, we can see the hidden meaning of the show, Courage is the extremely close friend to Muriel who would do anything, while Eustace is the man she's with who bullies the close friend, while also being cruel to his wife.

So if Muriel were to be intentionally causing these problems, why would Courage not realize this? Well Muriel does act incredibly kind, as many real manipulators do. Muriel is a woman who enjoys seeing others around her punished, but to keep it happening over and over again she hides her true nature, acting sweet to trap others into her usual trouble.

Of course this is all just my own stray thoughts, but thinking it from that perspective does make it a bit more cruel doesn't it? Eustace being cruel and getting his comeuppance is natural, but all of it being a ploy for Muriel's sick joy, while also never facing real consequences makes it more horrifying on a real world level. 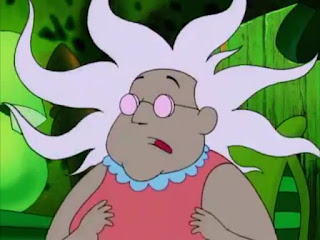