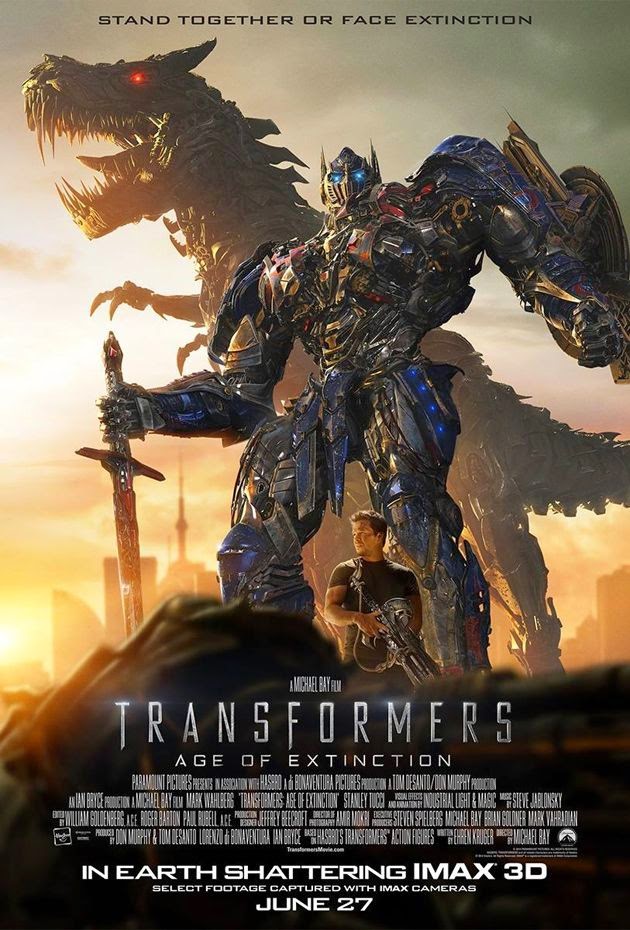 Synopsis-This time around we follow Cade Yeager(played by Mark Wahlberg),  an unsuccessful inventor trying to succeed so his daughter Tessa(played by Nicola Peltz) can get into college. Upon discovering a truck he bought is actually a beaten down Optimus Prime (voiced by the original, Peter Cullen), Cade finds himself stuck in something much bigger, a government conspiracy. Five years after the battle in Chicago, mankind now hunts the Transformers down, Autobot and Decepticon, stripping them down to build man-controlled versions. Optimus being the most wanted, is tracked down relentlessly for a new foe, Lockdown (voiced by Mark Ryan) , a bounty hunter sent by the mysterious Creators.


In 2007, Michael Bay gave the world Transformers, a film adaptation of the 80's cartoon show. Met with mixed reviews , and a lot of hatred from fans, Transformers, still managed to be big enough to create a franchise, one where each subsequent sequel has managed to bring more frustration from fans. By the third film it seemed like Bay would be out, but Paramount managed to convince the director for a fourth go, which would be treated as a soft reboot of the franchise. It seems as though the studio believes the director can still bring a huge hit, despite the hatred, so long as the human cast is replaced.

First things first, the things that have always worked, ILM deserves every bit of praise they get for the effects here, the bots look every bit as real as ever, in fact they look even better, the Transformers now stand out from each other better then ever before. Along with that, the voice cast, much like the previous films are great choices. A majority of the voices come from actual voice actors, a rarity in big budget movies nowadays, though one in particular, Galvatron, features a voice that's sure to please old fans.

Age of Extinction, thankfully brings more then just that, for the first time, the entire Autobot cast are likable heroes with personalities, along with that we get to see a lot of great action with them, hopefully they stay as our main team in the following sequels.It took four movies, but the human cast are finally entertaining as well, Mark Wahlberg  simply brings a  lot of needed fun to this film,  the best thing being that the actors tend to play their roles straight, gone are the actors from the past who only were around to provide a ridiculous joke at any given moment, this really provides a breath of fresh air.

The biggest obstacle this time around is the running time. Admittedly while there is more to like this time,  there are times where the length will be felt. The film does make up for it by being entertaining, but another thing that may turn off some is the humor, while restrained, is still Bay's style which may not always go well for some.

Old fans expecting to see the Dinobots for the first time in film may want to lower expectations, while they are very fun, the Dinobots only appear for the films third act, a disappointment, but at least they are fun when they're around. Some viewers might be turned off by how stupid this film, much like its predecessors, is, which is just something  that is almost unavoidable even in the good, previous TV incarnations of the franchise.

Transformers:Age of Extinction, is a blast, a fun time worthy of the Transformers name. It may not be perfection, but it's the best in the series yet, the first of the Bay films to truly be fun entertainment.