Cloudy With A Chance of Meatballs 2- Meatball Boogaloo 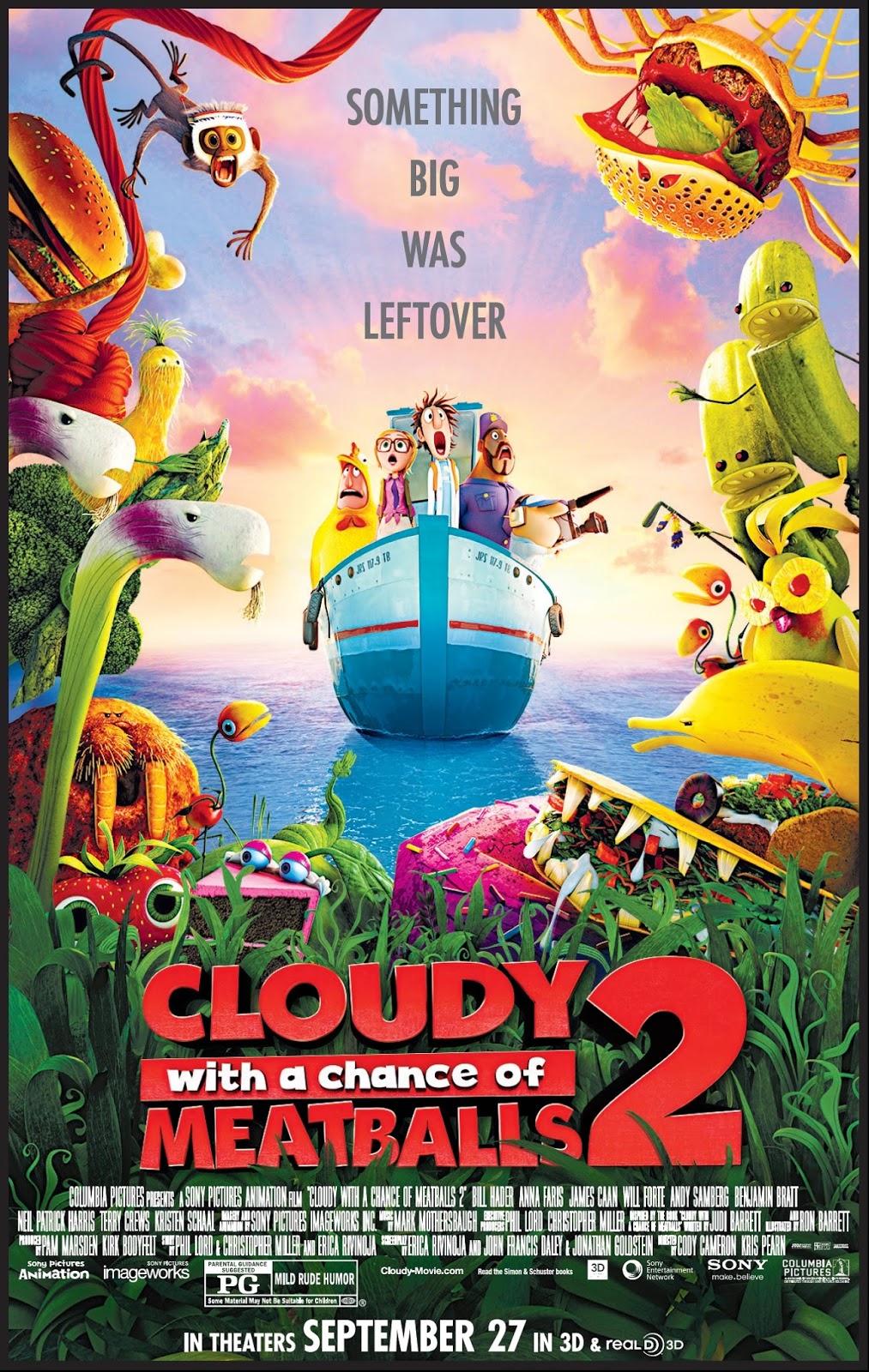 Synopsis-After the disaster brought by the FLDSMDFR, Flint's hometown must be evacuated until the island is repaired, thus bringing the Steve Jobs-like Chester V, an inventor whom Flint idolizes. The clean up faces a tough hurdle when the FLDSMDFR begins creating living organisms out of food, Chester V sends Flint to stop this mayhem. As the adventure continues hidden agendas begin to unravel, leading to a threat our heroes might have never assumed.

2009 can easily be named the best year for animation in recent memory,  Pixar released Up, their first best picture nominee. Laika got a great start with Coraline. Disney put out a return to 2D animation with their first great animated film in quite a while, The Princess and the Frog.  Wes Anderson gave us the Fantastic Mr. Fox, and then of course Sony Animation gave us what would end up being the film that would be making them a force to reckon with, Cloudy With a Chance of Meatballs.Like most great animated films that aren't from Pixar, no one saw this coming, "Cloudy" wasn't from some independent studio, nor was it 2D or stop motion, it was from Sony, whose previous efforts included two decent films, Open Season, and Surf's Up, nothing spectacular so of course we were all surprised. Luckily having been released in a month that doesn't have much competition, Cloudy With a Chance of Meatballs, became a hit, nothing too massive, but enough to ensure it had the respect it deserved. This lead into a sequel being announced and finally being released, which just begs the question, was it a worthy follow up?Yes honestly.

Right away the film reminds the audience what happened in the first film, so newcomers won't be lost on the story, it's effective, and helps provide insight as to why it all matters. Continuity from the first movie is important, but it doesn't get in the way of the entertainment. Thankfully the film does not go to the typical sequel route of creating arcs for each character once more solely because they had one in the first film. Instead Cloudy 2, focuses solely on Flint's arc, from naive fan to realizing what truly is best for the situation.That's where the film may open up some weaknesses, mostly because in the original every major character had an arc that made the film not only really funny, but emotional and sweet enough to be remembered as fondly as it is. That's not to say every character needs an arc, but when comparing the two, the main points one can add to the original, can not be added to it's sequel, so there's more there which will tip the scales to the original. That's not a huge take down on this movie, it's still as entertaining as it ever was, and that's enough to heap large praise at it, sadly though it's just not enough to make it tower over the original, merely stand close, but a bit short, making the better stand out more.

The easiest thing to say about Cloudy With a Chance of Meatballs 2, is that it's funny, really funny. Much like the original, this movie is filled with jokes that just get bigger, and bigger as the film goes along,and it definitely lands more hits then it ever does failed jokes. The original focused on lampooning disaster films, this time around it wisely chooses another target, monster island films.
There is a lot of joy in seeing the creativity play out on what food would create what animal, and even when the specific living food does not create an animal, the results are pretty hilarious. The animation is definitely a stand out for the film, it's like seeing a fast paced old school cartoon, but with modern technology, this is especially entertaining when seen with the villain, whose obvious identity may seem like a problem for some, but honestly even the film doesn't play it as a surprise so it works well enough to get by.Cloudy With A Chance of Meatballs 2, is in  every way a good sequel, one deserving of it's praise and existence.