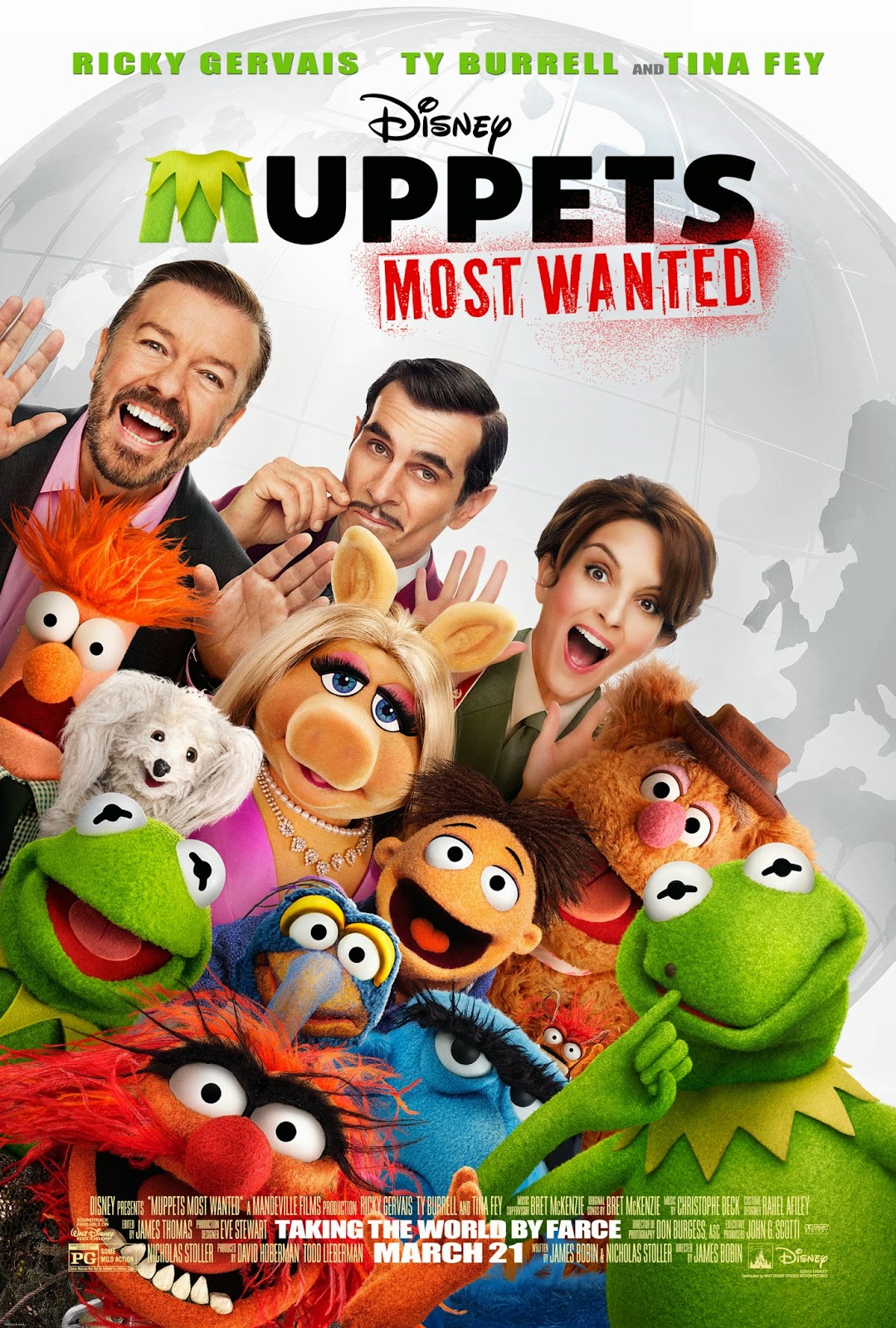 Synopsis- The Muppets are going on a world tour, thanks to new manager Dominic Badguy (pronounced bad-gie) played by Ricky Gervais, meanwhile, a Russian super criminal named Constantine,  takes Kermit's identity leaving Kermit to be arrested, the tour becomes a cover up to steal the world's greatest treasures.

When 2011's The Muppets brought more money to the franchise than any of the movies that came before (without inflation being added of course) a sequel was inevitable. Muppets Most Wanted never really had a chance to top it's predecessor in hindsight, as successful as it's predecessor was, it was not the biggest success in history, it made enough to be considered a success sure, but not enough to ensure it'd be a mega franchise, no matter how much fans would like that. Critically, the chances of being as good as the predecessor were just as slim, The Muppets was an emotional, hilarious film, that had it's entire existence devoted to just being a fan film shouting how proud it was that it got made in front of it's fans, basically nostalgia pounding you so hard that there was no way fans couldn't like that, not that it didn't offer any originality, or even had lack of quality, it was just not a "Muppet movie", as it was more of a "Muppet tribute movie". A sequel going from that would probably just be another tribute so the result would probably be a truly bad film, except "Most Wanted" isn't another tribute, at least not in most cases.

This will probably be among the few pieces of writing that will praise this film more then the last outing, despite it's flaws I really enjoyed it. 2011's The Muppets is by no means a bad film, it's very good, but as stated before it just wasn't a "Muppets" film, this is the first area where Muppets Most Wanted earns more respect from me, it is every bit a "Muppet" film, going back to the basics, without taking from the Muppets themselves, while giving to the human co stars.That being said, the film's biggest flaw does in fact come from it's persistence on using Walter from the previous film, he's far from the worst Muppet, in fact he's not even close to bad, he's just not a Muppet who should have a mainstay presence, Most Wanted, keeps having him appear as the Muppet straight man, a role that would be more bothersome if Kermit, who already embodies that role, hadn't had been separated for most of the film. Aside from Walter, the movie's flaws are  mostly non-existent, to the point that I'd be nitpicking, for example there's a bit of green screen (or blue screen) during the film's final song (which is a homage to a classic Muppet song) that is atrocious, but  dwelling on bad effects, while a great Muppet song is being played, as well as nice jokes is just something that seems a bit silly to complain about for long.

We get new musical numbers sure to delight Muppet fans, a personal favorite being "The Interrogation Song" sung by Sam the Eagle and Ty Burrell. While not perfect the soundtrack really has no bad song in the bunch, a plus in my book. As always we also get a supply of celebrity cameos, most are fun to point out, but fans of the previous film will probably love one cameo in particular.
Muppets Most Wanted is not the best Muppet film, it is however a better and more likeable Muppet feature, then the 2011 feature, and that's enough to light the lights one more time.