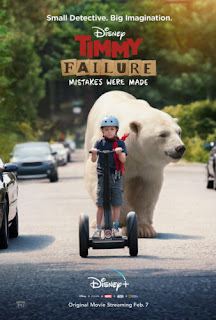 Timmy Failure runs a detective agency with his best friend Total, a polar bear, together they have much to solve as Timmy struggles against law enforcement, impending doom from middle school, Russian spies and normalcy.

I first saw footage of this at the D23 expo of 2019, it caught me off guard with the strange tone it was going with. Disney live action features, especially those aimed at kids, have never been the most interesting of their studio. Sure there is a certain charm found in some, but for the most part they never really stand out for older viewers, at least in positive ways. Timmy Failure:Mistakes Were Made, at first glance looks like one of those, with its kid detective lead, his polar bear sidekick, grumpy teacher, all that stuff, but what quickly becomes apparent is that it’s only in his mind that everything is as over the top as he thinks. As we see more of the world and it’s people, it’s easy to realize that had the film focused on the mother or almost anyone else it’d be a drama about a kid who’s likely on the spectrum and the way people work around that. Weird right? Even the initial footage didn’t make it look like that, it seemed more like a smart whimsical comedy in the vein of Wes Anderson, watching the actual thing reveals a kid movie that while uplifting, is sneaking in a more depressing truth, yet still positive.

Younger audiences will likely enjoy Timmy’s antics along with his polar bear (an imaginary friend obviously despite never addressed as such) but older audiences will find different reactions from it. Normally I avoid seeing any reviews, full or partially for movies I plan to review, but for this I needed to know what people felt about Timmy as I was confused how to address him. While there’s not much, some considered Timmy a brat which was understandable, while others just saw him as your typical kid lead in typical Disney kid movies, funny enough despite my positive thoughts on the film, I felt the negative review takes of him being a brat made more sense than the positive. Timmy is not a typical kid lead, yes we’ve seen imaginative kids who go a bit too wild on their ideas, but Winslow Fegley, in playing the role as some hard boiled lone detective never feels exactly like a typical Disney kid, he is a brat, but that’s okay because that’s kinda the point, Timmy is not a normal kid, he’s a misunderstood one that makes mistakes which can be bratty when you can’t find his wavelength. He’s negative to those who can control him like police, teachers, and various adults, but he does have his soft points, mainly with his mother Patty played by Ophelia Lovibond who can only get him to behave by acknowledging his odd behavior. It’s pretty amazing that they managed to get Winslow acting so good in this, it must be hard to get a kid who can perfectly act cold, lifeless and flat to this degree, it was kinda scary at times to wonder what this kid looks like to those around him.

In all honesty the main reason I have a hard time believing that this is a typical Disney kids film, is that this film doesn’t really boil its cast down to tropes or caricatures. Sure we believe that at times due to Timmy’s view but his view is never trustworthy, he believes a classmate of his is a Russian mole enacting a plan to destroy... society? But we clearly see she’s not like that. Even the grumpy teacher played by Wallace Shawn isn’t needlessly mean, he’s dealing with a kid anyone would have trouble with and admits it’s specifically Timmy that has made his career bad, which is understandable. It’s honestly more unique than I expected and to go back to an earlier point, Timmy does come off as if in another movie the big reveal or early explanation is that he is on the spectrum. I kept looking at Timmy wondering if he’s autistic because he really does seem coded that way, almost to a point where either Disney stepped in and said to not mention it to keep things light (yes that’s dumb but admit it, some think that way) or the director chose to avoid it because it would crash the fantasy aspect in to reality a bit much (which of course is why Total is never referred to as an imaginary friend). Regardless of it never being said, it still comes off in the movie that way which gave it an aspect that I found interesting and I’d imagine it’s why this movie can resonate with adults. Kids can be weird, but that can be harder when your kid isn’t normal, so it’s nice to see a movie celebrate that, while acknowledging that being strange can also be a struggle on its own.

On the other hand, I do imagine the film’s tone may create an issue among some adults. Most of the time I wasn’t sure if I should laugh or be more concerned with Timmy, but I do know I was entertained throughout, but I can understand if seeing Timmy’s behavior, especially considering the possibility of him being on the spectrum might raise some flags for some parents. Watching this reminded me a lot of Where the Wild Things Are, the movie adaptation, both about troubled kids escaping to their imagination, both easy to misunderstand for parents who may be struggling with kids themselves. I don’t consider it a big issue, but I do get if this movie doesn’t work for you precisely because it may seem like a bad influence on kids, personally I enjoyed it for being honest and showcasing that kids like this will be a handful.

Yes, I walked into this expecting Timmy to take a case that would get solved in the end, all through the charm and wit of child imagination, instead I got an episodic coming of age story. No, Timmy never grows up beyond trying to admit his faults and learning to cooperate more, but he’s just a kid, he’ll have time to grow more as gets older. I liked that this movie has reoccurring themes and bits, more than a straightforward story, why should it? Well okay, sure it should because Timmy thinks it’s all one big case, but pulling that curtain just far enough where we know he’s imagining things, but he doesn’t is why this feels so fresh compared to other Disney features. It’s definitely a highlight among the original movies made for Disney Plus and it’s shame that it’s been overshadowed by other things, yes I know that it’s a smaller feature, but so what? They can’t all be blockbusters. Timmy Failure:Mistakes Were Made is a touching movie that at first glance looks like a typical silly kids film, but upon closer look reveals itself to be a smart movie about the weird outcast kid and how people interact with him. It’s not perfect, but it’s charming, especially when we see people trying to meet our lead on his level despite his obvious foolish fantasies. If you haven’t seen it, and you likely haven’t I say this is a good one to watch, especially if you ever felt alone and misunderstood.