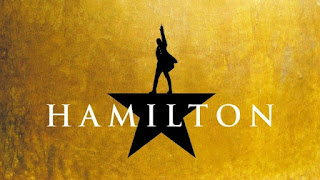 The famous Broadway play presented on Disney Plus focuses on retelling the story of Founding Father Alexander Hamilton. Here revamped with rap and hip-hop, while we see a more diverse interpretation of America.

After months of swearing I’d watch it I finally sat down and watched Hamilton, the musical play that everyone insisted was great... cause it is. It’s not often that plays find mainstream success anymore, so I’m glad the reputation this has is well deserved, from the moment it opened to end I was captivated by the performances, entertained by the music and loving the set up. Hamilton is just wonderful in it’s retelling of American history and feels bold in it’s approach which could’ve fallen apart with a less committed crew. It may have taken me months since release to watch it, but my endorsement would be to watch it as soon as you can.

From the very start, we know that this will be a very different retelling of American history than what we learned in school, not just in how much focus is on Alexander Hamilton, but the style of music and diverse cast. As Lin-Manuel Miranda would say, this is a telling of “America then” told by “America now”, which is to give this a specific energy that would not be offered by a more “accurate” cast, but also feels like a strong statement about who we are. For as white as the country was at it’s start, it was made up by immigrants, and as it has grown immigrants have been the backbone of the country since (even as the country continues to mistreat them) so in a way this play celebrates that special diversity in our nation’s core. While even in modern years, many bigots will act like only white people can be true Americans, the truth is that anyone of any race can be American, I love how this play wants that to be clear.

While I would never consider myself an expert on stage plays, I do generally understand some key differences to it and film. As this recording of Hamilton is from the play, you will quickly realize how much of your own imagination is necessary for the show. Settings, effects, crowds and even actions are acted out, but it is up to you to essentially create the visual in your mind, the play is there to give it some focus, but for the story to be fully realized you have to use your own mind to create it. It’s certainly a weakness for plays, yet it can also be a strength, some projects are too ambitious to be properly filmed for a movie, not just in effects, but in staging and style, while I don’t doubt Hamilton could be turned into a film, it would require a much different style that would make for a different experience. I loved watching this as it was and while some of it left me imagining how a film version might work, other parts made me worried that some of the charm I saw would be changed if not outright cut to accommodate the areas film cannot recreate from the stage. Film will always be my top art form, the medium I love most, but sometimes other mediums are better suited for certain tales, would film audiences be forgiving to a speedy two and a half hours of non-stop music? Especially as sometimes, weeks, even years go past between numbers? Settings change, characters come and go? Well we may someday know, but I loved this Hamilton and for now that’s enough.

As I mentioned in my video for Xanadu, musicals live and die by the quality of their songs, which Hamilton definitely excels in, I cannot find a dud in the bunch. While certainly some songs don’t get much play time on my own playlist as we speak, every song is fun to listen to and watch. “The Schuyler Sisters” may not be the sprawling setting in my head, but the performance on the stage is fun and perfectly sets up the idea of what’s supposed to be seen, that is how I feel throughout this play, such a strong line up of songs. Some other highlights include the cabinet battles, here imagined as rap battles, Thomas Jefferson’s “What’d I Miss?” Which sees Jefferson as a fun, spoiled, pimp-like jerk, “Non-Stop”, which is the play’s act I end, and of course, any song by Jonathan Groff’s King George III. If I’m honest I listened to the soundtrack prior to watching the play, which has left the music to settle in my brain long enough that even if I somehow hated the play I would’ve loved it just for the songs.

What is the best part of this play though? Who caught my attention most? Will the answer is Daveed Diggs as Thomas Jefferson who enters until the second act of the story. Sure, Diggs is there early as Lafayette, but when he shows up as Jefferson he steals the show, acting as a stubborn pimp, complete with James Madison (played by Okieriete Onaodowan) as his sidekick. It’s a testament to how great the choice to not cast just white guys was, Diggs would never get this role elsewhere, here it’s one of the most fun acts I’ve seen in recent memory. While this also sadly gets one of the more awkward moments from the play (Hamilton calls out Jefferson for slavery, a thing not exclusive to him and weirder still Diggs is played by a black actor) The overall performance shines so much, truly a highlight in an already great play.

I’ve heard there’s been issues regarding the cast and how some of it paints our founding fathers as more progressive than they were, which is odd. While yes it is true our past was not as progressive, but that’s kind of the point in the play right? Telling the story but with the views of the present to relate the past with present. It’s a fairytale of our truth so to speak, it’s meant to teach us and remind us of our past but that needn’t be entirely accurate so long as what matters is what’s delivered correctly. At no point in this do I worry people will think this is entirely true, the casting, music, and presentation guarantees audiences know this may be based on the truth, but it isn’t the whole truth, so it’s strange some would worry on that front.

Hamilton is an amazing play, filled with great acts and songs. I don’t know if a film version would be able to equal or improve on this, but I don’t need that, I don’t even find myself wanting it if I’m honest, this is as much as I need. To quote King George III regarding an eventual film version “good luck”. As for this, I think it’s one of the best things exclusive to Disney Plus and everyone needs to watch it sooner than later, it’s really no surprise that it’s become the phenomenon that it is.