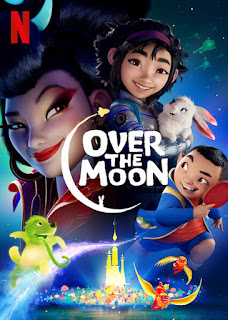 Over The Moon tells the story of a young girl dreading the idea of her father marrying a woman after the death of her mother. Eventually tired of all the change, the girl, Fei Fei, decides to fly to the moon because of a legend told to her by her mother, with proof of it’s reality she hopes to convince her father to not go through with the marriage.

To say this is a bizarre story does it no justice, yes Over The Moon is strange here and there, but that’s all in favor of it’s fairytale aspect, it’s a story for the young, but told with respect to the old. Inspired by Chinese myths and legends (feel free to correct me if I have that wrong, just you know, be respectful) Over The Moon never feels too concerned with logic beyond emotional logic, yes it makes no sense for a girl to make a rocket to the moon just to stop a marriage, but it does make sense that holding on to her childhood beliefs is what makes this big journey needed.  The lead, Fei Fei is like many other animated leads, without one of their parents, in this case her mother who dies early in the film, unlike many other animated features, Fei Fei’s journey is all about moving past the trauma. It’s because of that trauma and the fantastical elements of the story that makes it clear the movie isn’t exactly focused on real logic, because that doesn’t matter when the leads main issue is internal and emotional, her state of mind needs to change, not her reality. Ultimately it’s a fairytale in the vein of classic Disney animation, which is why it needs to move along without questioning the aspects adults would say are unrealistic.

It’s the surreal quality of the film that really becomes the highlight and main reason to watch this. Over The Moon, animated by Pearl Studios who previously animated for Dreamworks’ Abominable, animates this film and at first it seems it’ll look like a standard animated feature, with occasional 2D work courtesy of director Glen Keane who is known for designing a lot of classic 90’s Disney characters. As the film finally moves into the moon it becomes clear it’s not gonna look like much we’ve seen before and it truly is beautiful. I know a lot of people tend to equate beauty with how “realistic” something looks in animation, but I’m more impressed by the use of colors, design, shapes, etc. and this movie just uses it all to it’s advantage. It’s truly amazing seeing how often we get vibrant colors, images so surreal that certain viewers might enjoy this more under certain substances... I don’t endorse it, but I’m not denying it’ll add some value.

Beyond the animation though, the film does succeed with it’s characters. Fei Fei and her new step brother Chin are fun to watch and make for a nice pair of siblings, I especially like that their dynamic for most of the movie is not mutual hate, Fei Fei is annoyed, while Chin loves her unconditionally from the start. Chang’e, the moon goddess, who in a way acts as the antagonist for the bulk of act 2 of the film hams it up as a sort of conceited k-pop star. I can’t say whether or not the way Chang’e is depicted is respectful, but given the lack of controversy I’d assume most were fine with the portrayal. The biggest surprise is Ken Jeong playing Gobi, an alien sidekick that at first we assume will be the annoying friend for kids to laugh at, but along the way we realize is actually a fairly emotional mirror of Chin, meant to teach Fei Fei a few things about her own immaturity. I’ve got nothing against Jeong, I think he’s funny, but for those who may have reservations because let’s face it he has appeared in some bad animated features, just know he is well utilized here and does provide a lot of heart.

While I wouldn’t consider this among the best movies I saw from 2020 (granted with so much delayed it’ll still be up there) Over the Moon proves to be a well made love letter to Chinese culture that deserves more attention. While I’ll admit it could lose a song or two, the overall experience was better than I initially expected and in some ways reminded me of Disney’s Renaissance, not just because of the Glen Keane connection, but because at times it felt like it runs on the emotional logic from those movies, in some ways more than modern Disney does. I hope to see more from Glen Keane in the future as well as what Pearl will do next.

Support Me On Patreon