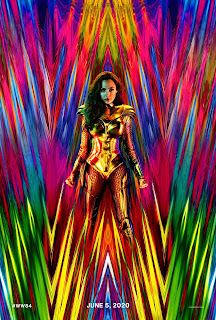 I wouldn’t be the first to say DC has struggled with their films, it’s no secret and a widely held opinion, sure there’s the classics, but for every classic we’ve had Green Lantern, Jonah Hex, Steel, you get the idea. In recent years, DC has tried creating their own film universe like Marvel’s, known as the DCEU, to say it has had a rocky road would be putting it kindly, but they did eventually get a beloved film, Wonder Woman. Personally, Wonder Woman is just fine, I didn’t think it was great, the last third suffers, but it’s got a pretty good story and set up, with a pretty good cast, overall if I compared it to it’s Marvel Studio rivals, it would rank among their weaker films, good but nothing I truly needed to see again. Since then I think DC has been finding their groove in their features, which is great, more good movies are always better, but with the current plan to bring out the “Snydercut” of Justice League and now Wonder Woman 1984, I’m beginning to think whatever success they’ve found has been accidentally stumbled upon rather than planned.

There’s nothing I wanted more from this movie than for it to be good, honestly why would I have wanted it to fail? I liked the first, I like DC comics and Patty Jenkins is a good director, the trailers and concept sold me, but the final product is a mess even in it’s best moments. No it’s not the worst DC feature, anyone saying that is of course free to think that, but I mean have you seen Batman v Superman recently? It’s still a slog. In honesty I enjoyed it more than any of the Snyder films, I enjoyed it more than Suicide Squad, and I even prefer it over the somehow best picture nominee Joker, but that doesn’t make it any less of a mess, it just means it can be fun which thankfully it is just enough to not ruin my mood, but not enough that I don’t wonder what is even happening with the film studio.

The first sign of trouble is during the intro wherein we see a young Diana compete in a challenge against other amazons. It’s a compelling scene, but in the end we see her lose due to cheating, but how she cheated is confusing on film, was it her falling from the horse then getting back on? Or missing a target (apparently it was this) the movie doesn’t make it clear and even then it feels more like a mistake on her part not a cheat. Why not just let her fail? It gets the same message across which to be fair is also sent poorly. Many viewers have stated it’s a pointless intro, I disagree because it does set up the theme of succeeding by putting the work in without shortcuts, but since it’s never referenced again and fails to demonstrate a clear message, I can see why some are missing that.

From there the movie continues to cycle through good ideas and bad, after the intro we get a Wonder Woman in the 80’s intro. The film uses vibrant colors and silly action beats to set up a lighter mood reminiscent of the 80’s which I think was a good choice, sadly once the mall scene is over the film's style just kinda fades to the background. It’s strange because the mall sequence perfectly illustrates the time period, but once we pass that, the movie, no longer feels as obvious where it’s set in, which is odd since the title wants to emphasize the year. Some have suggested the movie needed more 80’s music needle drops, which would help, but I think some more stylistic choices were needed, more of the color palette seen in the mall (not everywhere, obviously some scenes don’t require the same palette to set certain moods), more 80’s fashion front and center, just more that makes it feel like the time period, because at times I would forget it wasn’t supposed to be set in modern day. A film like Bumblebee wasn’t selling itself on the 80’s as much as this was and with that one it was very apparent from start to finish what period it was in, there’s no excuse with this film.

But look, a messy intro, a stylistic miscalculation, those won’t make a movie too bad, things get worse in the substance. One of the major selling points to this film was the return of Chris Pine’s Steve Trevor, a mystery in the marketing, but the result of a wish in the film. In movie Diana wishes for Steve back to life because she misses him, a choice that has brought complaints as Diana barely knew him, why would she miss him so much? For me I don’t hate the idea as much, love in movies is rarely complex so I get it, the issue for me is that this movie doesn’t sell it, even when we see their romance in this feature I felt nothing, I wasn’t impressed by it, I barely felt their connection, it was just barely there. Not that Wonder Woman needs love in her movie, but if they want to sell the romance aspect they should probably put more work in the relationship than just assuming because it’s in the comics that it would land for audiences. I’d argue that Barbara had a better connection with Diana early in the film, they didn’t need to be lovers (but I’m not against that either) but rather than the Steve team up I think the film would’ve benefitted from Wonder Woman working with Barbara for most of the movie until Barbara betrays her. I mean Wonder Woman wishing for Steve back to life doesn’t affect much of her character growth anyway, so why utilize him at all, if there was hardly much there for audiences to care about. If anything Wonder Woman’s conflict could’ve been her wishing to return to her home island, but that’s beside the point, the point is they misplaced where to put our interests in.

Speaking of Barbara, everything surrounding her is definitely a choice. We’re introduced to her as Kristen Wiig plays the role as her being a frumpy nerd, which instantly reminded me of the joke from Not Another Teen Movie where the “ugly girl” becomes pretty after losing her glasses and pony tail. The problem only worsens as we see Wiig’s big turning point to evil be her brutally beating up a sexual assaulter... no seriously, I mean sure she probably goes overboard given her strength, but the dude literally assaulted her previously and rape was only prevented due to Diana intervening, maybe the film shouldn’t use this as the moment we know she’s far gone? I don’t know, but the bad decisions don’t end there. Eventually Barbara becomes part cheetah, by way of the Jellicle cats and I get that it’s because some comics have done that, but in movie I just have to wonder why? Nothing really hinted at it besides clothing choices, why not just have her wear the cheetah costume to sorta mock Diana, it would’ve looked better than the effect they went with. Kristen Wiig is clearly trying and I still think ditching Steve for her would’ve been a better team up, as well as more tragic once she switches sides but I’m not judging the could have beens for this movie, which means unfortunately her presence largely detracts from the movie.

Then there’s Maxwell Lord, the real villain of the movie and... he’s an actual highlight of the feature. Pedro Pascal is essentially playing a Trump caricature (albeit a confusing one as he is way more charming) but there’s a lot of fun there, especially as he gains powers to grant wishes, it’s campy in all the right ways. Anytime Pascal was on screen he was just a joy to watch, to the point that I wish everything else was on his wavelength which was perfect. My only gripe against him is that the movie weirdly chooses to make his son a different race, it’s not the biggest problem, it’s a nitpick at best, but why? I’m for diversity, but much like Wiig’s character, all this did was remind me of a joke (this time from Walk Hard) wherein Dewey Cox asks an Asian kid if he really is his son. Still I’m thankful for Max Lord, the strong point of the movie.

Which leads to the weak point, look I don’t want to hate on Gadot, she’s clearly happy to have this, but she really needs to get better skills. In the first movie I think we were all more forgiving because there was a lot more riding on it, plus since we only knew her as Diana the warrior Princess there wasn’t more demanded of her, but this time she needs to sell the role as a lover who’s lost love, a loner, a concerned friend, and she does none of that. Yes part of it is her accent, much like Arnold Schwarzenegger, but even Schwarzenegger leaned in on his voice to give some good campy/comedic performances, we don’t get that out of Gal Gadot. I hope she improves in the future, because I did like her in the previous film, but this time the weakness really comes through.

I’m not sure if Covid affected anything about this film, beyond delaying it of course. There’s a chance some things would’ve been fixed had we not dealt with a pandemic, like how a lot of the action sequences look obviously green screened and unfinished, but ultimately I think we were always heading towards a mess. I hope the next outing works, but this one just doesn’t, it’s not bad, I think enough of it is fine, but it’s also not good. DC still seems to be chasing trends, with this movie possibly being in the 80’s for that nostalgia rush that’s still prevalent in movies, so I’m a little less confident that they’re fully out of the rut they were in at the start of the DCEU. Wonder Woman 1984 is by no means the worst thing anyone will see, but it is such a mess, a misfire with occasional stereotypical caricatures, harmful ideas and some unintentionally funny effects. I wish we got a better film cause decent trash ain’t cutting it.

Special thanks to my Patreon supporter Jackie Guarneros