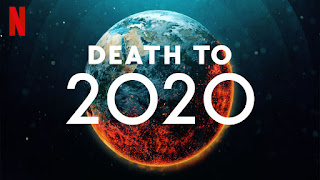 2020 is recapped in this mockumentary.

2020 was an insanely bad year right? Sure some good came about, but if you didn’t feel one major loss you had to be lucky. We all felt the pain, we all saw the stupidity and yet we still need a quick recap, which brings us to our first major attempt, courtesy of Netflix, Death To 2020, a comedic satire of the madness of our previous year. Any recap of the year, especially now, sounds like a lazy attempt of humor, something you’d only enjoy if you were there, but thanks to the team of Black Mirror, we get a pretty solid mockumentary.

It’s pretty hard to sell the comedy without giving away the jokes, but trust me, the cast do well on selling their characters for the madness presented. Some highlights include Cristin Milioti as a “Karen” type and Diane Morgan as the most average citizen, even Samuel L. Jackson, who's essentially just playing himself manages to get some really good laughs in this. While some caricatures might feel too familiar given how recent the year is, since the film continually rotates who's discussing the events none ever out stay their welcome. I will say that after one specific gag involving Boris Johnson I do wish there could've been some more wild "events" illustrated for the humor and to see how many would be fooled to believe certain events also happened.

I'm honestly struggling to say much right now, maybe it's because with a new president who can talk in complete sentences the horror of 2020 feels like it's truly behind us, it's not but it feels like it. At the very end the movie suggests the possibility of doing a follow up for 2021, a cute gag here, but I hope it's not a real consideration, this mostly worked because it was such an insane year and while 2021 did open with terrorists invading the capitol, with a leader whose more fit and a diverse staff working for the country it can't equal what we just went through. Year end recaps are nothing new, but the idea of them being meaningful beyond their year is absurd, yet 2020 was eventful enough that we often forget about the possible UFO sighting we had in April... or May? Anyway I can see this being an occasional watch to remind myself how wild 2020 specifically was.

Death To 2020 is a year end recap that was a blast to watch. At times it felt cathartic given just how crazy some moments were. I don't know if I'd say more is ever needed, it likely will never reach the same heights, but for this one year this was a very pleasing piece of entertainment that was exactly what I needed for a few laughs.

Special thanks to my Patreon supporters