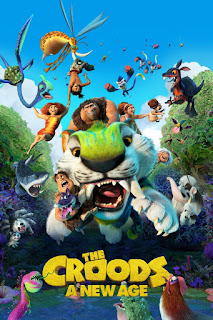 The Croods encounter a new family, the Bettermans, a more advanced trio of people. Ultimately the encounter leads to a struggle between new and old, keeping themselves together, all while Guy and Eep consider life together as a couple.

As far as animation studios go, I feel like DreamWorks Animation is probably the best when it comes to doing sequels, none of them are perfect, but compared to other studios they tend to progress their stories pretty well. Even their worst sequel, Shrek The Third, for as bad as it is, is a pretty good way to continue the story, with Shrek having to deal with becoming king... yes it was still bad though. My general point is that even compared to Pixar, who churned out many sequels the last decade, Dreamworks still manages to find ways to actually continue their stories with ideas that make for good character progression, so even if their bad movies, or simply weak, they do manage to feel like ideas worth exploring, unlike others, even the golden studio Pixar, struggle to make animated sequels feel like necessary steps. Which brings us to the latest sequel, The Croods: A New Age, the continuing adventures of the prehistoric family, the Croods. As a big fan of the original I didn’t think a sequel was even necessary which was true for most of the Dreamworks franchises, but I was proven wrong with each so when this was announced I figured I should give it the benefit of the doubt. The resulting film is... not bad, but strangely the most shallow of Dreamworks sequels? Sure it’s fun but also unnecessary in a way I’ve never seen from the studio, at least in regards to their sequel features.

To briefly summarize the studio’s past sequel work; the Shrek franchise put out three sequels, one bad, the other two fine, each progressing Shrek from loner to family ogre. Following that is the Madagascar series, with two sequels, each continuing the journey home and allowing the cast to reconnect with their roots. Kung Fu Panda also receive two sequels, revealing hidden truths, exploring kung fu and Chinese themes. Then, right after with you guessed it, two sequels is How To Train Your Dragon, which created its own mythology, culminating in a way that may hint at a connection with our world. And then just before our current subject is Trolls, with it’s sequel vastly improving on the original, building on its world with themes of race and culture through the lens of music. Whether they all worked or not (most did) I always felt like the sequels were smart progression of their stories and themes, then this movie happened.

As said before this is not a bad movie, it is a well made movie that provides fun and for that much I shouldn’t complain, a fun movie is always welcomed. Where I feel off is that I’ve never seen a Dreamworks sequel that feels so stagnant, sure we meet new characters, the Croods find a new home, and the lovers get married in this outing (does this count as spoilers, this is all predictable right? I don’t know I promise not to spoil more specific details) but nothing of substance actually occurs, it’s the last movie, only with a more spelled out happy ending. Grug fears losing his daughter again, Guy and Eep’s love is tested, but it feels no different than last time where they were discovering their feelings for one another, while the rest of the family provides laughs and the occasional story progression. Even with the new “modern” family the movie doesn’t really go to new places, there’s not even much of a commentary regarding old vs new, it’s more like an odd couple scenario but with neighbors. Even the main thrust of the story, the Betterman parents trying to get Guy with their daughter, barely adds much because we never explore the daughter’s feelings on romance, she’s mostly there to be Eep’s friend and ease the family into the idea of doing adventurous things. Things happen, I laughed, but I’m struggling to think of a reason to promote this. Sure I can say it’s funny, go watch it, but so are other movies, what makes this stand out to fans of the original and newcomers? sadly nothing much.

Even the animation, great as it is, doesn’t feel as impressive as the original film. Yes there’s more chaotic energy reminiscent of 2D drawn cartoons, but when it comes to the creatures it just feels lazy. I’m not sure but I suppose Chris Sanders having a lot less involvement in this outing sacrificed a lot of the wonderful creature design from the first. Leaving for a film that visually is up to date, technically very detailed, but not as fun to look at, it just doesn’t pop the same way or leave the same impression. Once again though, the saving grace for the visuals is the comedy, there’s a lot of physical humor to laugh at much like the first, and the technical improvements do help in conveying the physicality of the family, I just wish the there was more than just humor that left an impact. After a seven year absence, the animation is a vast improvement in terms of the detail, like watching Toy Story 2 and then jumping to 3, it’s noticeable, I just wish the leap came with more interesting things to look at.

Story wise there’s barely enough plot to fill the movie, but considering the film reaches it’s third act pretty early means that whatever joy you can get from the laughs, start to eventually drag. You just have to wonder whether it was the film needing extra time, or the filmmakers realizing they didn’t have enough ideas to work with, but there was no time to stop/delay the film. While the first forty or so minutes does set up the third act involving the tribe of punch monkeys, the focus gets a bit muddied once we’re there. Yes, the Betterman story is essentially resolved with the Croods finding common ground and befriending them, but we get a lot of time devoted to the girl power subplot of the Thunder Sisters, a group that the elderly Crood grandma hails from. It’s cute and funny, but feels a bit late to suddenly focus on. I wish it was handled better as Cloris Leachman clearly had fun with it (and as her final role I’m glad it was fun), but with so little time setting it up it almost rings hollow and like a lazy attempt to promote feminism (which should be promoted). Ultimately it feels like a series of vignettes all leading to one another, which some may argue was the case in the original, but the original movie was more of a travel feature, so encountering one issue after another just felt more natural, plus it had more heart to hold it together. This is a shallow feature, I know I keep saying that, but it’s true, sure the movie isn’t bad, but it suffers because of that.

The Croods: A New Age is funny, funny enough to be worth watching if you’re a fan of the original, but if you weren’t this won’t change your mind. It’s not awful and I wouldn’t call it a complete waste of time, but with so little character and story progression, it can’t help but feel unnecessary at times. I’m happy I saw it, but if it never existed I wouldn’t feel at a loss. If you love physical comedies you might have a lot of fun with this, but considering the original exists and overall does it better, there’s hardly much here that I can say makes this the one to check out. I’m not disappointed just underwhelmed.